Imperium in Imperio, by Sutton Griggs (1893) -- an obscure hidden gem of a novel 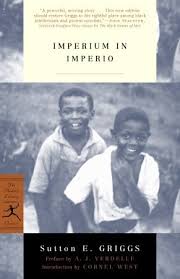 With only a few exceptions, I've been very lucky in my reading choices this year, and I count myself beyond fortunate to have discovered this book, Imperium in Imperio, which was published in 1899.  The author, Sutton E. Griggs, was the pastor at a Baptist church, but he was also very active in promoting and working toward a goal of racial equality.  In 1914, he began to organize a number of different groups including the National Welfare League and the National Religious and Civic Institute for the Baptists of Houston. The man had no fear -- evidently, in 1927, he spoke out publicly in Houston advocating that "the black race should enjoy the same rights and privileges as other American citizens." Griggs also was a part of the Niagara Movement established by W.E.B. DuBois in 1905, a civil rights organization which preceded the NAACP and one whose success was hindered by people like Booker T. Washington, who refused to support it or to give it air time in the Black media of the day. Becoming increasingly frustrated by the lack of change, Griggs took to writing to espouse his cause and Imperium in Imperio is his first novel. Four more would follow, but it was this first effort that eventually led to Griggs' reputation as a Black nationalist. And considering when this book was published, it has so much relevance to our modern world that it's time to bring this author out of obscurity and into the light.

While I won't go heavily into plot here, the story follows two men who grew up in the same small Virginia town.  Both were highly intelligent as children, even though they came from two different worlds: Bernard is the privileged son of a lighter-skinned black woman, while Belton comes from an impoverished background where his mom supports her children by doing laundry for white people.   Belton's mother saw great things in her son, and she was wise enough to realize that a good education would be vital to his future.  Eventually Bernard, whose father has secretly provided every advantage, goes off to Harvard.  Belton, whose college career was funded by a local newspaper editor,  makes his way to Nashville to Stowe University, a black school supported by white philanthropists in the North. Upon graduating, both settle into their respective careers: Bernard to Virginia and politics where he hopes to make inroads into taming white bigotry, and  Belton to Richmond to teach "in one of the colored schools" there.  Sadly, his time there was cut short; he moves on to another short-lived job as a stamping clerk in the post office.  When that job is taken from him, he is stuck:


"The white people would not employ him..., and the colored people did not have any enterprises in which they could employ him."

As the author notes,

It wasn't just Belton, though -- as more African-American men were graduating from college, they slowly came to realize that "there was no employment for them." While this situation produced an "army of malcontents and insurrection breeders," Belton decides not to join them, opting instead to take a recently-opened position as president of an African-American college in Louisiana.  However, he discovers what lies in store for black people who refuse to submit to a certain racist vigilante group there and undergoes a horrific experience that lands him in jail. It takes Bernard's political pull to get him out, but Belton has had enough. What follows in this novel continues this story, as the back cover notes, leading to the moment when the two meet up again and are


"driven to join a radical movement dedicated to the creation of an all-black nation in Texas."

That's about as much as I'm willing to say about his novel. While it's possible to read this just for story, its brilliance is that it  works under the surface on so many levels, providing much food for thought, as well as a  large number of topics prompting me to further research for reading.


While as one might imagine, a certain amount of melodrama comes into this story (I mean, come on -- it did have to sell and people love a good melodrama),  it is such a great novel that it really deserves to be more widely read by anyone interested in American literature, in African-American literature, or in Black history.  I think this is most certainly a milestone work, but while different, it's certainly not the first black political novel or the first novel advocating black nationalism as a number of people claim.  There is an earlier, probably even more overlooked book called  Blake, or the Huts of America written by Martin R. Delany in 1861/1862 that should also be appreciated for its author's understanding of "the realization of the intensity and persistence of white racism," and for the actions taken by the characters in that novel.  I just never know which book I open is hiding that unknown, obscure hidden gem -- along with Blake, I've  found it in Imperium in Imperio.  It is important, it is powerful, and it is beyond relevant in our own time.
Posted by NancyO at 11:18 AM