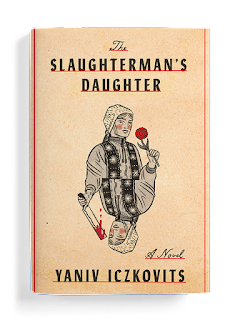 9780805243659
Schocken Books, 2021
originally published 2015
translated by Orr Scharf
515 pp
hardcover
The year is 1894, or the year 5654 as reckoned by the Jewish calendar.  In the latest issue of the paper Hamagid Mende Speismann reads a notice entitled  "Wife Lost," which stated the following:

"A woman went out in the second hour after midnight and has not returned since. All of our efforts to look for her in villages and towns, forests and rivers have failed. Her whereabouts are unknown and there's not a trace of her to be found...She has left her husband, five children, and miserable mother-in-law in despair in their village home."

Mende sets the paper aside for a moment before she reads the rest of the notice revealing that the missing woman is her sister, Fanny Keismann.   Mende lives in the village of Motal, in the Pale of Settlement,  the only legally-authorized territory in which Jews could reside "within the borders of czarist Russia."  Mende's husband Zvi-Meir had left his wife and children some ten months earlier,  and on her birthday, Mende tries to kill herself.   Fanny, a woman who wants to "mend the entire world," understands that it's not soul mending (tikkun) that Mende wants, nor is it really Zvi-Meir, but rather "she yearns for the authority of a husband and for the life of a wife" to make her life meaningful.   Fanny decides that she will take herself to Zvi-Meir in Minsk, to make him sign "a writ of divorce," and make things right.   Leaving her own home and her husband the cheesemaker, she slips out "in the second hour of midnight" determined in her mission.   She travels the seven versts from her village of Upiravah to Motal where the boatman, Zizek Breshov awaits to take her across the Yaselda river.  From there she plans to hire a cart and horses to begin her journey, and is surprised when Zizek, who "never leaves the Yaselda" follows after her.  Another surprise is in store when she realizes that he had not only hidden a wagon and two horses in some trees, but after helping her into her seat, he grabs the reins and "starts turning the horses." 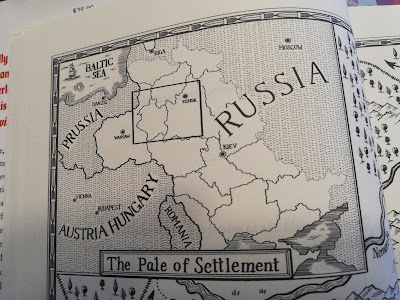 Thus begins Fanny's journey, and despite the potential dangers of being a Jewish woman on the road, she's not too worried.  She had been known since her girlhood  as "die vilde chaya," the wild animal,  learning and practicing her father's profession of ritual slaughtering.  Although she'd given up the profession when she married, she still carried a knife "tied to her right leg" as she had since childhood, always keeping it sharpened.  It comes in handy early on when she and Zizek come upon "a band of thugs" out to steal their cart and their horses; unfortunately this encounter results in the unwanted attention of the authorities who are sent to capture them.
Enter Piotr Novak, a district commander for the secret police (Okhrana).  Novak had formerly had a brilliant career in the military up until a horrific accident which not only shattered his leg but also "destroyed his life's dream."   When he learns of the deaths of the bandits, he is not inclined to take up the case, believing it should go to the regular police agency instead; that changes when he learns that the knife had been used in the way that "żyds slaughter animals."  While he thinks it highly unlikely, he believes that "this style of slaying" is "distinctive, and therefore sends a clear message: the Jews are responsible ..." and that "these murders might have been spurred on by an ideological motive, after all," and that perhaps he's "uncovered a new form of insurgency."  The chase begins,  and while Fanny and Zizek continue on their mission, they encounter a number of significant people, each with his own backstory and history that highlight not only the acts of individuals as opposed to the collective, but also how it is that, as Fanny notes early on,  "silent acceptance" allows for injustice and worse. 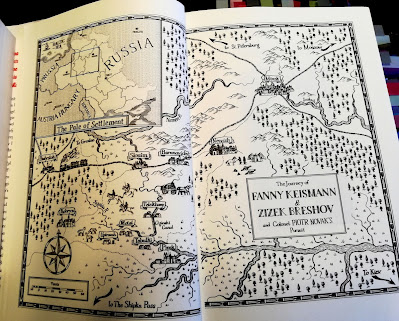 The dustjacket blurb calls The Slaughterman's Daughter a "rollicking and unforgettable work of fiction," and the pursuit that begins just a short time after Fanny and Zizek cross the Yaselda certainly earns the "rollicking" description,  but it is much more:  an examination of an empire on the brink of tremendous change, a meditation on the meaning of freedom, a portrait of the Jews who have set themselves apart in a Russia that doesn't want them, sharing "the same soil but not the same world."  Most of all though this is Fanny's story, one of finding her way in the world and discovering who she is.  Yes, it's a bit long; yes, parts of might have been pared a bit, but I don't care. I loved this book, and it's one I'd continue to love even if the rest of the world hated it.  The Slaughterman's Daughter is so  refreshingly different, reminding me somewhat of an old-fashioned adventure story mixed with history, but one still very much pertinent in our own time.
It's really, really good.
Posted by NancyO at 3:20 PM No comments: