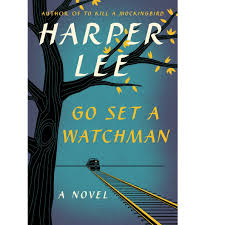 Go Set a Watchman is my book group's last read until September, or it would probably still be sitting on my shelf unread. I was one of those "oh my god an undiscovered novel by Harper Lee" people who got it the day it came out.  It's my practice not to read actual reviews of a book before I read the book, but it was really tough to not get that this book caused no end of controversy upon its publication.  I mean, when people are taking their books back and stores are actually offering refunds, I take notice.  I also took notice when I started hearing people complain that the Atticus Finch in To Kill A Mockingbird wouldn't espouse the same sort of racist, paternalistic and frankly horrific views that he does in Go Set a Watchman.  Then, of course, there's the big scandal over provenance ... but quite frankly, I wasn't really that curious about these things enough to want to make me pull the book off my shelves and actually read it right away.  Other books came along, and life, and well frankly I sort of forgot the book was there until I was scanning shelves to put together a book-group reading list for 2016.

After reading it, it occurred to me that the same people who were so upset over the change in Atticus Finch between To Kill A Mockingbird and this novel are facing the same issue that Jean Louise (aka Scout) faces toward her father here. As so well stated by Jean Louise's Uncle Jack, there are icons being broken in this story, which is one thing I think many of the readers just couldn't handle, hence the returns of this book and the many, many people who said they wouldn't be reading this because they couldn't bear for their hero to turn out to be different than he was in To Kill A Mockingbird. It's sort of ironic in a way that the very disillusionment facing Jean Louise transfers over to some of the reading public as well.  I have to admit that while I was reading I didn't think about the whole Atticus Finch controversy and all of the other issues associated with this book, because I didn't want to be influenced.   So when I say that I wasn't in love with this book, I can honestly say that it has absolutely nothing to do with any of that, and I'm not going to talk about any of that here.   My issue with this novel is that it is, for the most part, a big mess of a book. I have to side with the people who argue that rather than this book appearing as a sequel, this is instead a draft, an unfinished work, and I have to full-on disagree with the dust-jacket blurb that calls this book a novel of "... effortless precision."

Don't get me wrong -- I do think there are some really good moments in this book where Harper Lee's brilliance as an author shines through. For example, one thing done very well here is how she sets up Jean Louise's dilemma -- here's a girl who has strong ties to the south and to her family, yet finds herself at odds with both in terms of how she views the issue of racial equality.  That is definitely a very tough situation to be in, and we feel it. While her anxiety is a bit overdone (okay, overwrought)  at times, it does come through loud and clear.

My unhappiness with this book really is in how it's written. Aside from some not-credible dialogue and characters that feel sort of half finished, my biggest issue here seems to be  a major tendency of the author to meander, to go off point and to interrupt the momentum at critical junctures.  It is really all over the map, giving this novel a sort of disjointed feel, making me wish the story would please get back on track in several spots.  For example,  it takes until page 101, where Jean Louise discovers a racist pamphlet called The Black Plague near her father's chair, for us to get into the heart of this novel.  This discovery is followed by Jean Louise secretly following her father and Hank to the courthouse, where, from her place in the balcony she hears the main speaker who as it happens, is a racist who travels all over to spread his gospel of hate.  Worse for her though is the fact that she sees "Men of substance and character, responsible men, good men..." sitting there, seemingly taking in what this "man who spewed filth from his mouth..." is saying, and comes to the conclusion that Atticus and the people she's known all her life  have "failed her."  So now we're at the heart of this story but then what happens? Pretty much right away, from page 125 straight through page 140 we go back in time to Jean Louise's childhood to sixth grade where where Scout gets kissed by a boy, gets her period, thinks she's pregnant, and Calpurnia sets her straight. Momentum lost.  When we finally get back from this interlude, Jean Louise visits her Uncle Jack and we're in for a long series of pages where Uncle Jack babbles on, giving Jean Louise "some kind of elaborate runaround,"  trying to explain things while not really saying much at all.  But wait, there's more: while Jack leaves Jean Louise wondering what the heck just happened there, another flashback appears, another nineteen full pages of memories about the time Jean Louise lost her falsies at a school dance.

Perhaps the flashbacks were used to illustrate Uncle Jack's idea that


"...it's always easy to look back and see what we were, yesterday, ten years ago. It is hard to see what we are."

or maybe they speak to Jean Louise's ties to place, family and friends, but at the same time they pop up at exactly the wrong times in the narrative, sort of negating any momentum gained from a previous scene.   At one point both Jean Louise asks "What's this got to do with the price of eggs in China?,"  which could easily sum up my feelings about including the long flashbacks.

If I consider the brilliance of  To Kill a Mockingbird, it's definitely difficult to justify how a novel filled with this many flaws is the polished, finished work of the same author, which is why I don't really believe it's a sequel at all, although it was presented to readers as such.  I have to agree with this article which states


"Lee handed in the manuscript of Watchman in 1957; her editor, Tay Hohoff, described it as ”more a series of anecdotes than a fully conceived novel,” guiding a wholesale revision of the novel into Mockingbird, which was published in 1960. It’s not clear that Lee, now 89 and ailing,  ever intended to publish Watchman as a separate book."

I also agree with the author of this article from The New Republic:


"For once, none of those flaws in the novel can be blamed on the author:   She was learning how to write when she composed Watchman, and wasn’t able to ready this draft for publication. In the two and a half years it took her to turn this mess into To Kill a Mockingbird, she evolved beautifully as a stylist and storyteller, helped along by an astute editor. "


I'm just an ordinary Joe kind of reader person, not skilled at all in literary stuff, but I do know that skilled, artful  writing in most cases should take precedence over plot. Here I didn't really find that to be the case.
Posted by NancyO at 5:15 PM