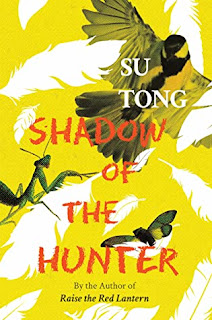 Recommended highly.
Posted by NancyO at 3:32 PM No comments:

The Enlightenment of the Greengage Tree, by Shokoofeh Azar


As I generally do prior to reading any book, I take a glance at the dustjacket blurb, both for the basic outline of what it is I'm about to read and for information about the author, as well as the translator if there is one.  I got a bit of a jolt this time around -- there's the normal  bit about the author, Shokoofeh Azar, saying that she moved to Australia in 2001 as a political refugee, but the surprise is that the translator's name has not been provided, "for reasons of safety and at the translator's request."  After reading what's in this book, I'm not surprised, but to the anonymous translator: thank you and well done.


The Enlightenment of the Greengage Tree  is, in a word, stunning.  As the Stella Prize Judges' Report said of this book, "the novel presents a richly woven magical reality:"


"Drawing on techniques of classic Persian literature, and recalling aspects of South American magic realism, Azar powerfully juxtaposes the beauty of Persian culture and mythology with the brutality of a political regime responsible for the destruction of so many lives."

The story begins in 1979 and plays out amidst the backdrop of the Islamic Revolution, following the lives of a family from Tehran who become caught in its wake and decide to flee, wanting only to "disappear in silence."   They make their way to remote Razan, where the father, Hushang, sees the "calm eyes of the villagers" and knows they're at the "safe place where we were meant to be."  What they don't know at the time is that this place, where as the dustjacket blurb notes, they were "hoping... to preserve both their intellectual freedom and their lives,"  will not stay remote for long, as the revolution will eventually make it way there as well, nine years later in 1988.  As it happens,  in August 1988, at 2:35 p.m. Roza, the mother in this family, "attained enlightenment" as she sat "atop the grove's tallest greengage plum tree" overlooking the village.  Not so coincidentally, 1988 was the year of the "prison massacres" (which, as of 2018 the government of Iran had still not acknowledged);  it was the very moment of her own son Sohrab's execution, in which he was


"hanged without trial and unaware he would be buried en masse with hundreds of other political prisoners early the next morning."

The story is narrated by Bahar, one of the two daughters in this family, and reveals the impact that events during this decade had on this family.   The fact that she is a ghost (not a spoiler since it's also on the dustjacket blurb) is not so extraordinary in this book -- as the author stated in an interview at the LA Review of Books,


"People of old or ancient cultures sometimes seek the metaphysical solution for realistic problems. And it has nothing to do with superstition or religion. If you learn to look at these beliefs in the right way and deeply, you can find the roots of myths, and important and beautiful meaning in these beliefs."

In Azar's telling, the forests around the village of Razan are filled with ghosts as well as jinns and other spirits;  the village is plagued by different events including a black snowfall and an overflowing river of tears spilled from the eyes of ghosts, and Beeta, Bahar's sister, will go on to become a mermaid, among other sorts of mystical occurrences.  Quite honestly, it all seems perfectly natural to these people, which is why I didn't even bother to question these more fantastical elements -- here they are interacting with and dealing with their world in their own way.

While it is often emotionally tough to read, The Enlightenment of the Greengage Tree addresses not just the horrors of this particular decade but also what it takes in order to survive through the worst.  It deals with grief and loss, seeking and finding, life and love.  It is a most original and powerful book that I will probably never forget, almost dreamlike in the telling.    You will have to wind your way through the elements of magical realism to keep  a chronological eye on the narrative, but as you do so, savor the time you spend there.

Most likely not a book that everyone will like, but for me, it's now of one my favorites of 2020.  I loved this book.  Absolutely.