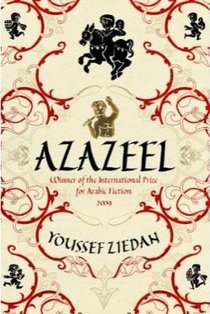 "Don't confuse matters, my son, for those are people of power, not people of faith, people of profane cruelty, not of divine love." --131

In a 2010 interview, author Youssef Ziedan notes that his book


" is an invitation to reject religious intolerance, the claim that violent acts in society are done in the name of [God], and to reject those who have made themselves the congress of God on earth."

He certainly doesn't need to convince me because I've thought this way for as long as I can remember.   I've also always thoroughly believed the next thing the author says in that same interview, which is that


"Religious violence is not linked to a particular religion -- it is linked to people who have specific secular interests and use religion to achieve these interests."

Indeed, this idea comes through very clearly in this book, which is one I very much enjoyed after a bit of a shaky start and one I can recommend most highly. Given what's happening in our world today, it  is a timely read, and  I hope it becomes more widely available in the US since only used copies are available, and those are mainly offered from the UK.

Before starting the novel, it is probably advisable to read the translator's notes at the back of the book, which I should have done but did not.  It seems that this book caused no small bit of controversy after its publication; Bishop Cyril is a "revered figure in the Coptic tradition," and evidently a number of Coptic commentators charged the author with misrepresenting him.  Ziedan's  response:  "the history of the period is part of his own heritage as an Egyptian, not the exclusive purview of the Coptic hierarchy."  The translator also notes that  English-language readers "can certainly ignore these controversies," and


"enjoy the work for its narrative power, for its evocation of a neglected period that was formative in the evolution of Christianity, and for its sympathetic portrayal of the humble monk Hypa's struggles with doubt and with the temptations of the world."

And that is precisely what should happen as people read this book,  although personally, now I'm really interested in this controversy so I'll probably read more about it.

Ziedan begins this tale with a first-person narrative revealing that the story that the reader is about to experience had been found in 1997 during an archaeological excavation of ruins to the northwest of the city of Aleppo, in Syria; more specifically, a set of scrolls containing this account were found along the "last stage along the famous Silk Road,"  ranging from Asia to the Mediterranean; the road also linked the two cities of Aleppo and Antioch.  They tell the story of anonymous monk who had given himself the  name of Hypa, and who, in the year 431 AD, had undergone a self-imposed forty-day period of seclusion in the monastery where he currently lives.  It is an uneasy time in the Christian world -- as Hypa notes, 431 was an "unfortunate year, in which the venerable bishop Nestorius was excommunicated and burnt to death."

[sidebar: if anyone is all interested in the conflict between Nestorius, Bishop of Constantinople and Cyril, Bishop of Alexandria, a brief but intense examination of the Christological debate is available here.]

While I'm not going to go too much into plot here, the story (aka this novel)  handed to us by the anonymous translator of Hypa's chronicle interweaves Hypa's personal account of his journeys, both spiritual and physical, his doubts and "constant uncertainty," along  with the known history of the early Catholic church of this period.  Hypa writes his narrative urged on by the titular Azazeel, who is best known as the tempter causing Adam and Eve to be exiled forever from the  Garden of Eden; he is also, as Hypa comes to understand in a feverish delirium, an inner alter ego, "another me." Hypa's story takes him from childhood, where he first became a victim of Christian intolerance toward nonbelievers, into Alexandria to medical school.   It is also in Alexandria under the auspices of  Bishop (called Pope there) Cyril, who lives by the words of Christ

that Hypa hears his fellow Christians proposing the most brutal and inhumane treatment of Jews and other non-Christians in their zeal to "cleanse the land of the Lord."  However, there is one particularly horrific event that not only leads to Hypa leaving Alexandria never to return,  but also to question his faith.    From Alexandria he wanders through the Sinai desert, making his way into Jerusalem, where he meets Nestorius; from there he makes his way to the monastery from which he is writing the account of "everything which has happened in my life."   It is also a novel that just begs the question of how  heresy can exist when truth/orthodoxy seems to be an elusive concept, and thus we go back to my opening quotations from the interview with the author.

To be very honest, I got to about page 112 or so and really wasn't getting much out of this novel. However, I turned back to all of the blurb raves about it at the beginning of the book and decided I must have missed something, so I started it completely over again. First, though, I spent some time doing some research on early Christian history, theological debates etc., to make myself familiar with the Cyril/Nestorius issues as well as Arian and other heresies before returning, this time much more confident. It's not necessary, really,  but it's just a personal thing -- I want to know what I'm reading, especially since I was not too familiar with the theological issues at stake here.  My point is that it seems to start out slowly but it does pick up, so for Pete's sake, don't apply that silly 50-page rule here, or the best parts of this novel will be lost. I can certainly and without hesitation recommend this book.