The Good People, by Hannah Kent 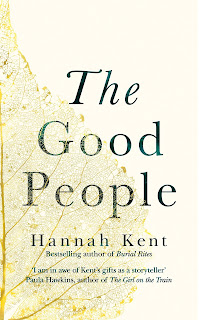 
As with this author's fine novel Burial Rites, The Good People is based on real events, this time from  nineteenth-century Ireland.  In 2011,  Kent (as she described at Lit Hub in 2017)  came upon  an article from the Morning Post reporting on the Tralee assizes of 1826 which mentioned


"the trial of 'Ann Roche, an old woman of very advanced age' indicted for a serious crime 'committed under the delusion of the grossest superstition.' "


Finding little else about Ann Roche, she went on to write Burial Rites, and then came back to find out more about her elusive subject in 2015.  Back to the microfilm she went, and finally discovered another article, one that mentioned two more women associated with Roche, Honora Leahy and Mary Clifford.   The Good People brings the three together in a story that  kept me up until 3:30 a.m. when I had to stop just for the sake of actually sleeping for a few hours two days ago.  I am still thinking about it; I'm still haunted by it.

Nora Leahy has recently lost her daughter, and now she's lost her husband.  After the new priest visits her and reluctantly prays for him ("the sacraments are for the living and cannot avail the dead"), the house fills with neighbors.  Martin's body is turned on the bed, "so as to avert further misfortune," and Nora's nephew Daniel, who had witnessed Martin's death at the "crossroads next to the the blacksmith's," reveals that as he and another man, Peter O'Connor, were taking the body to the Leahy's home, they had seen lights ... "Coming from where the fairies do be, down by the Piper's Grave." Peter confirms Daniel's story, commenting that


"You mark my words, there'll be another death in this family before long... First the daughter passes, and now the husband. I tell you, death likes three in company.  And if the Good People have a hand in it ... well."

In just a few pages then,  we discover that the people of this small village live in a world where the Church and superstition live side by side; where fairies, aka the Good People, are believed to exist as  more than just fodder for storytelling.

The gathering is interrupted with the arrival of  Nance Roche, who has come for the keening, a practice that is frowned upon by the priest.   She is a woman who is known for her cures, whose job is to see to "the daily blights and bruises of the living."  She is an herbalist, but also has what she refers to as "the knowledge," and lives in a small cabin "between mountain and wood and river" where she's been for the last twenty years:


"...she stood in for that which was not and could not be understood.  She was the gatekeeper at the edge of the world. The final human hymn before all fell to wind and shadow and the strange creaking of stars.  She was a pagan chorus. An older song."

and she is known to some as "Nance of the Fairies."  Whether her "gift" is, as one character notes, "God-given or a token from the Good People," no one knows, and it is not for them to know.  All she will say is "Twas them that gave me the knowledge to cure folk and bring the fairy dart out of them..."

Grieving for the loss of her daughter and now her husband, Nora now finds herself alone to take care of her grandson, young Micheál, whose condition has caused him to change from a happy, healthy infant to one who, according to Nora, is "ill-formed" and now unrecognizable from the baby he was.  For her, he is "burdensome" and she needs help during her grief, so she hires fourteen year-old Mary Clifford who needs the job to help support her starving family.   Although Mary develops a sort of bond with  Micheál, it doesn't take long for her to catch the women's gossip at the well, referring to Micheál as the "blasted cratur" and "changeling" that has caused all of the ills of the village; and indeed, things are getting pretty bad there.  Nora's grief has taken over her life, there is no help coming from either the priest or the doctor, so she begins to believe that there may just be something in what they're saying -- that her grandson is a changeling, but what does she need to do to get her real grandson back?

With the same sort of claustrophobic atmosphere so excellently evoked in Burial Rites, The Good People delves into the story of these three women; it also looks at the conflicts between religion and superstition, medicine and traditional folk healing, and the forces of the time that come together to precipitate the events in this novel.   I think though that  one of the characters here points to the heart of it all when she says that

I so very highly recommend this book.  Beware -- it will haunt you.