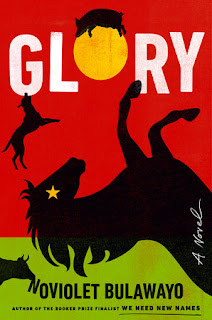 9780525561132
Viking, 2022
403 pp
hardcover
"Even the sticks and stones will tell you that an animal can't just preach change without embodying it themselves, and that that change has to begin at the top and then trickle down to the rest of the masses."
The setting of this novel is the fictional country of Jidada, which is actually a stand-in for Zimbabwe, the home country of author NoViolet Bulawayo.  As she stated in an interview for the Los Angeles Times, on November 14th of 2017, she awoke to the news that Zimbabwean president Robert Mugabe had been ousted in a coup:

"There was so much celebration, just the joy of seeing the dictatorship come to an end the way it did. It was complicated, though, because we knew his deputy was going to take over. But we hoped against hope that we had a turned a corner."

She decided that she would go back to Zimbabwe; she also wondered if it was time for her to write a "nonfiction book about this moment, 'too unbelievable to ignore.' "  Once there though, she saw firsthand how "the sense of hope turned very quickly into disappointment and devastation,"  and  thought perhaps the book she should write should be more along the lines of a "modern-day parable of Zimbabwe."  This is that book, and the players are all animals.  Before I actually bought this novel, I had decided to give it a pass, thinking that it seemed like it might be a case of Animal Farm redux.  But my curiosity got the better of me, and as it happens, I was completely wrong.    In fact, at some point close to the beginning of this story, author NoViolet Bulawayo reminds her readers that this is definitely not that -- as Dr Sweet Mother,  the wife of the president of Jidada says while addressing a crowd from the podium,

"This is not an animal farm but Jidada with a -da and another -da!"
A modern-day parable indeed, Glory takes as its subject the end of the long reign of Jidada's president, the  "Father of the Nation" or "The Old Horse" (who actually is a horse here),  and the rise to power  and rule of his vice president, Tuvius Delight Shasha, aka Tuvy (also a horse) when The Old Horse is ousted.  Knowing that his life is in danger after several attempts at killing him, Tuvy leaves the country after a meeting with the generals who fear that Dr. Sweet Mother will try to steal power for herself and want him to take his place in the Seat of Power.   The Jidadans are also ready for something different -- as they said, they

"...couldn't meet the dawn carrying the sad, terrible baggage of that awful past, no; it absolutely had to find us on a brand-new page and proper ready for a fresh start, best foot forward, no less."

Upon his return once the Father of the Nation is gone, he promises the Jidadans a "New Dispensation,"   telling them that God has saved him to put him at the helm of a New Jidada

"this country's long, long, long terribly dark night has indeed ended and we now perch on the wings of a brand new dawn..."

However, as the Jidadans will discover, the New Jidada seems much like the old one, complete with oppression, corruption on a huge scale, disappearances and violence:

"...the children of the nation found themselves standing hungry and thirsty and hopeless and penniless in the queues, tholukuthi Tuvy's eyes watching them from old election posters that promised a new and better Jidada they now understood, with a heartbreaking knowledge, would never come, was never meant to come."

As the Jidadans said, "... it was what, it was the worst of times, it was the worstest of times."
The word "tholukuthi" appears numerous times throughout this book, translating into something like "I find that" or "it's the case that..." or something along those lines.  The author also talks about the "sticks and stones" that "will tell you" something,  and I'm thinking that these phrases reflect the storytelling traditions and folklore of her culture.
It's in writing about the "daily lives of a population in upheaval" (as the dustjacket blurb notes) that the author shines here, capturing the hopes, the cynicism and the strong opinions of the people via their thoughts, their interactions, Tweets, WhatsApp posts etc.  Glory expresses their frustrations and their fears, but also their resilience and their hopes.    Her use of animals instead of people, she explains in that same LA Times interview mentioned earlier,  afforded her "a sense of freedom" that she didn't believe would be "possible otherwise."   I thought it was a bold move and a good one as well, and even without human actors, she manages to get a number of ideas across, most importantly, the need for political, government and social reforms as well as the need to document your history before someone changes it.   On the downside it can be repetitive, it is a bit overlong, and there are times when it just gets a bit boggy, but looking at the bigger picture, Glory is a fine novel, one that is so very timely given what's happening in our world today.   There's so much more to this book than I can capture in such a brief space, but truly, it's one very much worth your time, energy and attention.
Just as an FYI,  you don't need to know about Mugabe or his successor Mnangagwa,  but it is actually somewhat helpful if you can read about it ahead of time.  Here's a link to an article from The Atlantic that might be useful (it's actually Mugabe's obituary but it tells you what you need to know).
It does take some patience, but I definitely and highly recommend this novel.
Posted by NancyO at 3:34 PM No comments: