All The Rivers Flow Into The Sea, by Khanh Ha 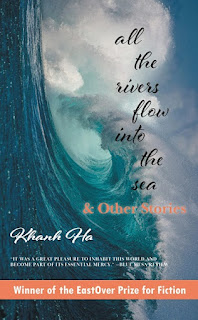 9781958094020
EastOver Press, 2022
197 pp
paperback
It is always such a pleasure to read Khanh Ha's work, and his latest,  All The Rivers Flow Into the Sea is no exception.  It is a collection of short stories which, as the back-cover blurb notes, "brings to readers a unique sense of love and passion alongside tragedy and darker themes of peril."  Here the author examines a cast of various characters who somehow manage to retain a sense of humanity while surrounded by trauma.  For some it is life lived during the Vietnam War; for others it is either some sort of a connection to that war that continues to remain long after the conflict ended or who are just trying to stay afloat on a daily basis, doing what they must to continue to survive or to help others in their time of need.  In each story, life comes under siege in some fashion; the book as a whole highlights the sense of just how interconnected these lives and stories have come to be.
These are not simply tales of war though; although the war and its aftermath are prominent here, the author also infuses the history and culture of Vietnam into each story, along with his beautiful rendering of the landscape and the environment itself.  In  "The Yin-Yang Market," for example, a young Vietnamese woman who had been adopted by an American woman as a child returns to the Mekong Delta and reveals some of her childhood memories to the innkeeper, centered around the orphanage where she stayed and the nuns who took care of her.  One of these tales involves a visit to a market just past midnight on the fifth of the Lunar New Year, where all transactions are done in the dark, something she was told she would "never again see anything like"  after leaving Vietnam.   "The Girl on the Bridge" is harrowing in the telling, as a young man relates his family's story  to a girl while waiting for help pinned underneath an iron brace on a bridge bombed by the Americans.  It showcases the horrors of the Northern Land Reform, but on the flip side, it also reveals both  the beauty and the sustenance that nature and the land can provide despite the politics and the pain.   In some cases, encounters during wartime, as in the titular story at the end, come down to the risks involved in survival during the most difficult and most dangerous of situations.  "All the Rivers Flow Into the Sea" is one of the most poignant stories in this book, one that left me thinking about what would come next in the life of the young girl who seems to finally find the answers to her hopes in an American man, only to have them suddenly taken away.
All the Rivers Flow Into the Sea is a gorgeous book that anyone even remotely interested in Vietnam should read;  it is a fine addition to the small library of this author's books now sitting on my shelves, asking the question of what it truly means to be human and examining the very essence of humanity under great stress. It also seems to ask for reader empathy, and that I have plenty of for the people who populate this book.   I am grateful to the author for my copy and I wish him all the best.
One more thing:  I am grateful to Teddy Rose for being included on the tour of this book; if you would like to see what others thought of it the link is here.
Posted by NancyO at 4:38 PM 2 comments:

The Trees, by Percival Everett

"History is a motherfucker." 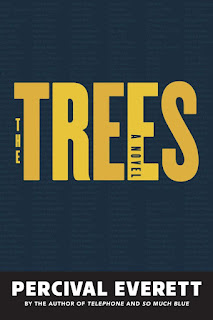 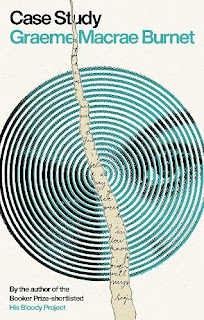 9781913393199
Saraband, 2021
278 pp
hardcover
I bought Case Study long before the announcement that it had been selected for this year's Booker Prize longlist,  and like the vast majority of books that come into this house, I  shelved it and promptly moved on to something else.  That was October of last year; last week's above-mentioned announcement reminded me that it has just been sitting there and maybe it was time to read it, not because it landed on the longlist but because I've really enjoyed Graeme Macrae Burnet's previous novels.  As was the case in those books, Case Study blurs the lines between fact and fiction, so much so this time around that I found myself spending way too much time doing google searches while reading.
Set in 1960s England, Case Study unfolds in two parallel narratives, beginning with the author's ("GMB") receipt of an email from a Martin Grey in Clacton-on-Sea.     As revealed in the Preface, in Glasgow's  "notoriously chaotic Voltaire and Rousseau bookshop," "GMB" had run across a copy of a book written by Collins Braithwaite, who'd made an impression as "something of an enfant terrible" among those in the "so-called anti-psychiatry movement" of the 1960s.  The book, Untherapy, described by GMB as "salacious, iconoclastic and compelling," collected case studies;  Grey's email turned what was at first an interest in Braithwaite on GMB's part into a "properly aroused" curiosity.   Grey explained that he had learned about GMB's interest in Braithwaite after reading a blog post GMB had written;  he then claimed to have come into possession of a series of notebooks written by his cousin containing "certain allegations about Braithwaite" that GMB might like to read. At first refusing, GMB ultimately accepted the offer and the notebooks were sent to him.  He was still not convinced,  but after expressing his skepticism to Grey, he decided that since the notebooks "dovetailed" with his own research "it seemed too apposite to resist."  The result is Case Study, which alternates between the content of the notebooks and GMB's biography of Collins Braithwaite.
The author of the notebooks, as GMB discovers, is a young, unnamed woman whose sister Veronica, she was convinced, committed suicide two years earlier  after several sessions with Braithwaite.  After having seen the psychologist on television and reading the newspapers the day after that were "filled with condemnation of Dr. Braithwaite's behavior," she bought and read a copy of his  book Untherapy. Obviously the names of his patients had been changed, but she discovered more than one link between a particular "Dorothy" and her sister. After also reading Braithwaite's Kill Your Self, she said, the name of the book had "chilled" her, and by then her interest in this man and his connection to her sister's death had been fully piqued.  She'd thought she might go to the police, but realizing she had nothing to offer them, she decided instead to go directly to  Braithwaite himself.   As she says at one point, "Suicides make Miss Marples of us all," and eager to learn more about Braithwaite, her sister and the method "in Dr. Braithwaite's apparent madness,"  she decided that the only way to find out more about this man was to make an appointment with him.   Realizing she can't go in as Veronica's sister, she took on another persona, an alter-ego if you will --  Rebecca Smyth --  who is quite literally everything our unnamed notebook writer is not and has gone forth with her mission in a quite naïve fashion, not knowing quite what to expect.
The biographical sections are done almost in documentary style; from the outset we know that GMB has done a lot of research about Braithwaite, and while he "cannot attest" to the truth of the notebooks' contents, which may be, as he says,

"... no more than the flight of fancy of a young woman with self-confessed literary ambitions, and who, by the evidence of her own words, was in a troubled state of mind,"

he takes no chances with his subject, going on to make a "more detailed study of Braithwaite's work" along with conducting interviews with people (some of them from real life)  known to have some sort of connection with him.    Arthur Collins Braithwaite grew up in a working-class family in the North, his mother having abandoned the family when he was still a young boy.  His father, an ironmonger, had decided that his sons would follow him into the family business, but even at an early age Arthur had been determined to go his own way.  After World War II he  studied at Oxford, but was unable to fit in "among the Eton and Harrow boys" and was failing miserably at his studies in Philosophy.   He moved on to France, but it was back in England while working at  Netley at a place "accommodating psychologically scarred veterans," where he met R.D. Laing, a psychologist from Scotland, who "made a lasting impression" on Braithwaite.  Back at Oxford to study psychology at the age of twenty-eight, he slowly began  to find himself "at the centre of things" holding regular meetings in his room ("The Wagstaff Club") where he managed to gather "fawning acolytes" of both sexes; it is here, I think, where we begin to understand just what a narcissistic ass this guy has become, not only in terms of his inflated sense of his own intellectual prowess, but also in his relationships with women.  After graduating with a Ph.D, and without going into any kind of great detail here, he  eventually wrote his Kill Your Self ,  not a smash hit at the time of its publication but a book that would go on to "be soon found in the back pocket of every student and bar-room philosopher."  Braithwaite also  gained a measure of notoriety and a regular clientele after attending a party where actor Dirk Bogarde  was a guest -- this  "unqualified charlatan "was soon getting calls from actors and people connected to the movie and theater business, as well as "cavalcade of beautiful girls and bohemians." He rode this wave for a while, his ego and wallet being fed by these people and his rise to fame.

The notebooks detail Rebecca's sessions with Braithwaite and also delve into this woman's "real" backstory and current situation; the question eventually becomes one of how far we can trust what she's written. There is an ongoing sort of tension set up between her accounts and the biographical side of things and to be honest,  the more I learned about Braithwaite the more I began to fear for Rebecca, with good reason.
I've left everything purposely vague here, since anything more would spoil the reading experience (and it is an experience, for sure) but alongside the story, as the dustjacket cover notes reveal, the author brings out themes dealing with "the nature of sanity, identity and truth itself."  More importantly, the idea of what actually constitutes a self runs throughout the book, with ongoing references to topics including doppelgangers and the notion of private vs. public persona.  Despite the seriousness of these ideas, there are also some wickedly funny moments to be found here, and the ending found in the postscript  was for me one of those rare out-loud "wtf" moments.   I had great fun with this book, especially in trying to figure out what was real and what was fiction, which wasn't always easy, but this is the sort of out-there novel I tend to enjoy.   Confession time: I admit that it wasn't too long into the book that I started googling Collins Braithwaite, and from what other readers have to say about this book, I wasn't alone.  Case Study is cleverly constructed, very well written, and for me, insightful, but above all it was highly entertaining.  It's a book I can certainly recommend with no hesitation.
Posted by NancyO at 11:32 AM No comments: