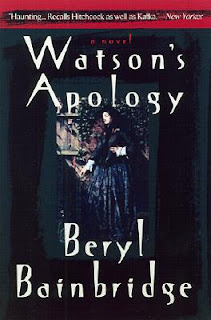 July seems to have been the last time I made a post here which is like eons ago but I've been been gone, busy, gone, reading in other areas and what have you.  My current push is to read some of the books that have been sitting on my shelves forever so I'll definitely be filling up more space here from now on.  Seriously committed to this project, I started in the room that holds all of the British/UK fiction with J.R. Ackereley's charming and delightful Hindoo Holiday (NYRB) which I won't write about but which is a book I'd definitely recommend.

Then it was on to this book, Watson's Apology, which is based on a real-life murder that took place on October 8, 1871 on St. Martin's Road, Stockwell.  The back-cover blurb reveals that the murderer was "a Victorian clergyman, John Selby Watson," and that he bludgeoned his wife "brutally to death."


Moving from the cover to the inside we discover right away what Bainbridge is going to be doing with this book from her "Author's Note," in which she says the following:


"This novel is based on a true story. The documents presented have been edited here and there to fit the needs of the narrative, but are otherwise authentic. Almost all of the characters are drawn from life, as are the details of the plot...What has defeated historical inquiry has been the motives of the characters, their conversations and their feelings.  These it has been the task of the novelist to supply."

And what she supplies is a look inside of a miserable Victorian marriage, beginning with letters from Watson to the woman who he had briefly met "some years ago" while attending Trinity College in Dublin, Anne Armstrong.  Anne, whose socially-prominent family fell into decline when her father had "lost all his money," now  lives with her sister Olivia in a lodging house under destitute conditions, doesn't remember Watson at all, but with a "present so drab and the future so bleak," decides that "she would use him to free herself." She had written him


"telling him of the poverty of her existence and the vexations she endured, day after dreadful day, through being force to live, cheek by jowl, among people who were inferior to her in intellect and imagination."

During their brief courtship it becomes obvious to each of them  that all is not quite right, but neither says anything to the other and they eventually marry.  At first she is convinced that she's made a "love match," while he is "astonished at how easily he'd adapted to marriage," but as time goes on, he finds himself in "an existence that is unpleasing," feeling rather victimized and at a point where he feels that "my marriage has destroyed me."  On her part,  Anne feels that all she's done has been "out of love;" at the same time she remains haunted by her family's past.  In the marriage, events begin to take their toll, sparking a desperate downward spiral for both Watson and his wife.   Where sympathy should lie is, I think, one of the big questions asked here, and the entire story made me wonder if the title of this book is meant to be a sort of "apologia" on Watson's behalf rather than an apology in the true sense of the word.  Whether Watson's wading in blood is or is not of his own doing is also a question, and the answer to that one will be down to the reader.

Very nicely done, and  although many readers thought that the courtroom scenes were dull, I thoroughly enjoyed this novel from its beginning to the very last page.  Then again, I'm a huge fan of Beryl Bainbridge and have many more of her books on my shelves waiting to be read.   I'd advise patience in reading this book and would recommend it to thinking readers rather than to those who just want a rehash of an old Victorian crime. This book is not that.

Posted by NancyO at 2:00 PM No comments: