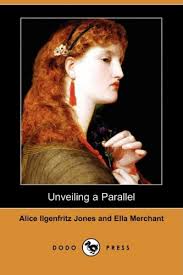 A few nights back my friend and I were having a conversation about what we've been reading lately, so I brought out this book to share.   Her first reaction: "there were feminists in Cedar Rapids back then?"

Alice Ilgenfritz Jones and Ella Merchant actually published this novel under the pseudonym of "Two Women From the West." The first publication of this book was by Arena Publishing Company, an outfit that published "books on political and economic reform," as well as a number of Utopian novels, a genre that was quite popular at the time. Arena also published speculative and science fiction by authors who have long since faded into obscurity.  The owner and editor of Arena, Benjamin O. Flower, liked Jones & Merchant's book, which saw two editions before going out of print.

As Carol Kolmerten in the introduction to the 1991 edition of this novel (Syracuse University) states, Unveiling a Parallel is


"one of over two hundred utopian novels published from 1888 through 1918 that envisions a better world -- the largest single body of utopian writing in history." (xxiv)

Perhaps that time frame can be pushed back a bit.  After a bit of research, I thought that the earliest example of feminist utopian novels in the U.S. came from Mary E. Bradley Lane in 1881, with her Mizora (which I just bought), but there was one that came along even earlier (1870) --  Man's Rights, or How Would You Like It, by Annie Denton Cridge.  Moving forward, perhaps one of the most famous books in this genre of writing is Herland, by Charlotte Perkins Gilman, published later in 1915.  The point is that feminist utopian novels were quite popular through the turn of the century, although the utopian novel in general  was largely the provenance of authors, who according to Kolmerten, were "unknown middle-aged, male ... Protestant, middle class, and white."    For further reading on the topic, a good place to start is The Utopian Novel in America, by Jean Pfaelzer; now on to Unveiling a Parallel.

To keep things short and sweet, the male narrator of this story climbs in his "aeroplane" and takes a nice trip to Mars. He first arrives in Thursia, which surprisingly is very much the same as the 19th-century America our traveler has just left.  He quickly learns the language of his host, so as to better communicate with the woman he's fallen for, Elodia, his host's sister.  Elodia is a highly-successful banker and businesswoman, as well as a natural leader in her own social set.  The narrator is smitten, until sometime later, when certain other things about this woman are revealed, at which point he loses his interest because she's not the woman he thought she was, nor, he realizes,  would she be willing to become so for any man. In fact, Thursia itself holds a number of surprises for this man, including but not limited to, women vaping a potentially-lethal mix of valerian and alcohol, and a place called "Cupid's Gardens," where  powerful women like Elodia go to meet lovers or pick up prostitutes for their sexual pleasure. It seems that there is just too much for him to overlook in terms of the women of Thursia. The narrator moves on to Caskia, where he finds a more enlightened, more utopian society, one where people are able to enjoy some measure of leisure thanks to technology.  This is a place where everyone works for together the greater good, one where the notion of universal love is a true reality,  where material possessions are of no value, and where our narrator meets and falls for a woman as unlike Elodia as possible.


There is a huge amount of great satire to be found here, most especially in the dialogue between the narrator and the Martian people with whom he speaks.  As he asks a ton of questions about the women there, what ends up happening is that we actually get a great contrast between more enlightened ideas about Martian women and the attitudes toward women back home.  This book seems to reflect more than anything Jones' and Merchant's ideas about who women are and who they could be if equality could be attained.   Sadly, while the narrator in this book can begrudgingly admit to some positives in terms of how women are perceived and treated on Mars, he never fully comes around, noting that his own views are just "too thoroughly ingrained" in his nature.

I won't really say more about this novel, except that while it is fun to read, it can also become  polemical in nature, and sometimes a definite chore to get through. There are also a number of contradictions spread throughout the story.   But it is also informative and I have to credit the authors with being so futuristic in their thinking. Writing this book in a time where literature pretty much stressed the patriarchal was also gutsy and something different. I'd say that anyone at all interested in American pre-20th century feminist writers will definitely want to pick up a copy of this novel for his/her library.  For me -- while it was a bit tough to get through at times, it is a great find and a wonderful addition to my slowly-growing collection of works by lesser-known American women writers.
Posted by NancyO at 11:49 AM