Once Upon a River, by Diane Setterfield 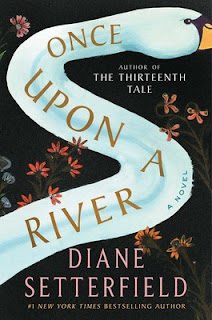 "Grief is a powerful force, and who knows to what a man might be driven when his child is lost to him."

England, at some point in the late nineteenth century.  It is solstice night, the "longest night of the year."  Everyone knows that it is

"a time of magic. And as the borders between night and day stretch to their thinnest, so too do the borders between worlds. Dreams and stories merge with lived experience, the dead and the living brush against each other in their comings and goings, and the past and the present touch and overlap. Unexpected things can happen."

Whether or not the solstice had something to do with the "strange events at the Swan," well, that is but one of the questions that arise in this story, and as we're told,  the answer is a matter of judgment on the part of the reader.

The Swan at Radcot, just a day's walk from the source of the Thames, is a "very ancient inn," well known for its centuries-old "specialty" of storytelling.  As this story begins, Joe Bliss, the husband of the landlady, is just beginning a story of his own to entertain his customers when, as the dustjacket blurb reveals, something "extraordinary" happens.   At a time "late for a newcomer," the door opens, and in walks a man carrying what turns out to be a little girl.  He collapses, the local nurse is sent for, and finds that the girl is dead.   However, as the dustjacket reveals (so this isn't a spoiler), while the locals at the Swan are contemplating these strange events, a "miracle" occurs:  some time later the little girl opens her eyes, fully alive but mute.   As the word gets out about this "impossible event," at this point in the story, as in the case of the "streams and rivulets" that feed into the Thames,  the author brings in "tributaries" to add their own "volume and momentum" to this strange story.  These come in the form of the people who may have some claim on the child at the Swan.   I do believe that's all I should say at the moment about this book, since everything later, if you will, begins to flow from that point.

The author nicely interweaves folklore, superstition and legends into this book, which is at its heart a story about storytelling and grief; it is much more character driven rather than one relying on plot.  The legend that continually pops up, unsurprisingly, is that of  of Quietly the ferryman.  As the story goes,  his daughter went missing, and three days later was found dead downstream.  A year later, her mother gets a shock when her daughter returns, telling her mother she'd been "on the other side of the river," where her Daddy had come for her. But a price had been paid: it had cost him his life, and "it cost him his death too."    The ferryman, it is said, "for all eternity,"  exists "forever in between the two states,"  watching the river, helping those who "get into trouble" there to make it home safely.  If it is "their time," though, he "sees them to the other side of the river."  An understanding of this particular story among all of the stories told here, I think, is part of the key of reading these characters, who each in his or her own way, sort of exist "in between...two states."  I won't go into it so as not to wreck things,  but my own reading took that particular approach and it worked very well.

I do have to admit that after the initial events occur at the Swan, the story sort of meandered (it seems I can't get away from the river metaphor here) a bit, picking up for me somewhere around page 150, where, coincidentally, the full story of the ferryman appears.  At that point things started to click in my head and come more into focus, and then I didn't want to put this book down.  There were times I felt that where a particular story (this is after all a book of several stories) was heading became  a bit too obvious, and toward the end I ran into what I felt was a bit of awkward, even cringeworthy  (actually, pretty bad) dialogue between a father and his son that could have come right out of the The Empire Strikes Back. On the flip side, though,the story of the little girl captured me and   I did enjoy the focus on the natural world as well as the interplay, again quoting the dustjacket, of "folklore and science, magic and myth."   In her two previous novels, she has focused on these elements, as well as the nature of grief, a huge theme here,  in crafting some pretty captivating stories within stories, and she's done it again here.   Don't worry if you're not into what just might be a supernatural edge in your reading; as I said in the beginning, if it is or isn't is up to you.

Just a final word:  if you play by the 50-page rule and give up on this book early on,  you'll be sorry.  I know, because while I don't have a set limit about when to let go, I ended up giving it a chance when I thought it was going nowhere,  which was in my case, a very good decision.
Posted by NancyO at 2:08 PM No comments: