"What a twisted world, where weakness spurred men to mete strife out to each other, with the mortal weapon of fear in their hands. Until they put it aside, injustice, tyranny and war would not be laid to rest in the world." -- 51

I have to give credit where credit is due. I need to thank the awesome people at Glagoslav for my copy.  The link is on purpose: I've read a number of Glagoslav titles now and they continue to  impress. I've also been trying to keep up with what's out there from smaller presses across genres, and Glagoslav, it seems, never sleeps.  Anyone interested in discovering more works in translation might benefit from visiting their website and perusing their offerings -- as noted there,


"The primary focus of Glagoslav Publications is to bring out translations that embody values that are uniquely Slavic in nature and celebrate universal values as reflected in diverse cultural demographics of Russia, Ukraine, Belarus and other nations in the region. Every book that we publish has already achieved an engaged readership in its native land, has been recognized by international critics, and, in many cases, has either received or been short-listed for prestigious national and international awards."

It's a win-win from where I sit.


First, a bit about the author.  Born in Turkmenistan (a former Soviet Republic), in 1956, Ak Welsapar obtained his first Master's degree in Journalism, then went on to get another in Literary Theory (1989) after joining the Soviet Writers' Association.   In 1993, a piece he wrote about ecological issues in Central Asia got him kicked out of the Soviet Writers' Association, and he was put under house arrest.  At this time, and through 2006, Turkmenistan was ruled by Saparmurat Niyazov, who according to Paul Theroux writing for  the New Yorker,


"treated Turkmenistan as his private kingdom, a land in which everything belonged to him."

Welsapar's work didn't at all sit well with the government -- he was declared a "public enemy,"  the government wouldn't allow his work to be published, and all previously-published works were banned, "confiscated from bookstores and libraries, to be burnt." The author left in 1993 to avoid both imprisonment and persecution of his family, and they became residents of Sweden the following year.  To this day, he is still a "black-listed" writer in his native country. So we are beyond fortunate that Glagoslav has chosen to publish it. It is significant, as author Brian W. Aldiss notes in a brief intro to the book, since it is "the first novel ever to emerge from Turkmenistan." It is also a winner of the English Pen Award in 2014.

and now to the novel:

Several years before this story actually begins, the small fishing village that is the setting for this tale was visited by a "group of medical scientists" who discovered that the coast there was "simply a natural wonder." According to their findings, the place would be great for a "sanatorium for asthmatics and people with other respiratory diseases," and soon government officials began to arrive from the capital. At first the people in this village were quite proud and thought this was a good thing:


"Look here, if they hadn't been living for generations in such a health-giving, astounding location,"

thinking the government would build "nice new brick houses" for them.  Trailers were brought in for the construction workers, and building began on the new sanatorium. Then, when the money ran out, construction stopped, only to start up again several months later. This time was different -- the villagers soon found out that they were ordered to leave the area, "without causing any interruption to the ongoing work."  Now these people are being "deported" and relocated to a town a few hours away by government order. As the relocation begins and the fishermen become slowly adjusted to their impending move, there is one among them who refuses -- Araz Ateyev, with a wife and two young children.  Their age-old way of life has been proscribed since sturgeon fishing is now illegal, but Araz continues to fish and believes that the coast is the "inheritance" left to him by his father.  Without it, he'd "be nothing."

At this point, the author goes back three hundred years earlier, to introduce the legend of Aypi, a local woman who was out gathering stones one day from the beach as was her regular custom.  A "group of strange men from unknown lands"  had found their way to this  part of the coast, and "not being particularly timid," she began to talk to them. When their conversation was over, the men left her a "stunning ruby necklace," and back at the village, she was told that by talking to these men she would bring "calamity" on them all. It wasn't so much what she'd said, but rather it was the fact that she'd had "dealings" with these outsiders that brought fear to the villagers, so they decided to get rid of her, and her husband threw her into the sea from an island cliff just off the coast.  The story goes that from then on, the people living and working on this coast were "haunted by the fear that those uninvited guests would return someday, bearing not gifts, but weapons."

Aypi continued to slumber under the sea,  but

And now, it seems, Aypi's spirit has returned to the "living world" to exact her own form of vengeance.  As she moves swiftly through this modern world, the story begins to encompass not only Araz's resistance to the powers that be while trying to protect his birthright, but it also explores the conflicts between men and women, based on her idea that men want "dependent wives," since, according to her, "The thing men most fear is independent females." She believes that


"in every man's heart was the dread of being weaker than his wife and so losing her. This provoked them to their false bravery, brutality and inhumanity,"

and wonders how women could "be content" with the situation.

Aside from following the story of Araz, The Tale of Aypi also, among other things,  examines generational divides as well as the differences between traditional and modern ways of life, making for plenty of food for thought in this deceptively slim book. It may be short, but there is a lot going on in here.

Recommended, and as soon as I have word that there are more of Welsapar's novels in translation, I'll be picking them up as well. It's one of those books where the beginning made me think it was going to be one thing, but in the end, I got a whole lot more than I expected.  How rarely does that happen?? 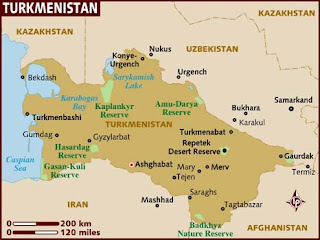