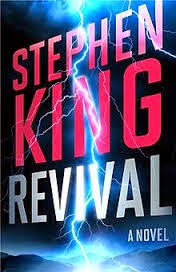 "...it may be strange, but it is true, and the ancients knew what lifting the veil means."

My quotation is not from Revival,but rather from Arthur Machen's "The Great God Pan,"  a favorite story that seems to have been an influence on King in the writing of this book. It also influenced author HP Lovecraft, whose influence comes shining through here in no small way.   In fact, there is a lot of literary influence in this novel, but let's just say it won't be appearing on this year's list of my favorite books.  I think having read so much of Lovecraft (and the authors he's influenced over the years) sort of spoiled it for me, so in a way, it's not the author's fault that I didn't like this one as much as I might have.    It's kind of like seeing a movie then going back to read the book -- you already know what's going to happen so there's less of an impact when the ending comes around.  While reader reviews and star ratings rank this book quite high, like usual, I'm fighting the current here. You can click here to discover why.