A Tale for the Time Being, by Ruth Ozeki 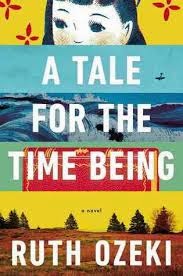 
I'll admit that I was not even considering  reading A Tale for the Time Being when it first came out, but it got my notice when it was shortlisted for the Booker Prize last year. I remember thinking "a hello kitty lunchbox" smacks of YA and that I just do not do.  That year I'd also decided to quit trying to kill myself reading longlists and shortlists, but I bought the longlisted books anyway thinking I'd get to them someday.  There it sat on my shelf until I got together with a group of three other women to read it and then I was angry at myself that I'd let it go so long. The three other women weren't so crazy about it, but then again, two of them had left it for the day before we were supposed to talk about it before finishing it, so well, you know. Unlike them, I found this book to be very different from the norm, I was intrigued by the metaphysical aspects of the book and the magical realism, and I got very caught up in how past, present and future all come together here.

Ruth Ozeki goes meta here, as the story begins with a novelist named Ruth who lives on an island off the coast of British Columbia. She has been trying to write a memoir about her mother and is suffering from writer's block. Out walking one day, something catches her eye underneath a "massive tangle of bull kelp" which turns out to be a Hello Kitty lunchbox.  She brings it home, prepared to throw it out, but her husband Oliver  discovers that it's definitely not trash. They pull out a stack of Japanese letters, an old watch and a  book, which turns out to be Proust's A la recherche du temps perdu, or In Search of Lost Time, a title that takes on more significance as the story progresses.  Opening the book, they find that it's not Proust at all, but rather the diary of a teenager named Nao.  Ruth believes it may have been a part of the debris from the 2011 tsunami, and becomes intrigued.  She decides to read the book the way it was written -- meaning that rather than sit down and read it cover to cover, she'll read each of Nao's entries separately each day.  The first thing she reads is Nao's introduction:

A time being is someone who lives in time, and that means you, and me, and every one of us who is, or was, or ever will be. As for me, right now I am sitting in a French maid cafe in Akiba Electricity Town, listening to a sad chanson that is playing somewhere in your past, which is also my present, writing this and wondering about you, somewhere in my future. And if you're reading this, then maybe by now you're wondering about me, too."

As Ruth reads, she learns that this diary is not one that's "filled with pink fantasies and nasty fetishes," but rather Nao's purpose is to relate the "fascinating life story" of her great-grandmother, her Jiko, who is 104, a Buddhist nun, Taisho-era novelist, anarchist and feminist. As Ruth has been having problems writing the memoir of her mother, the life-story aspect strikes a chord, but when she learns that Nao has decided to end her own life, to "drop out of time...Exit my existence,"  Ruth slowly begins to become obsessed with knowing what may have happened to this girl.  As it turns out, she learns  much more in the process of reading the diary.

The novel plays out across space and time, going back and forth between past and present, connecting all of the items found in Nao's lunchbox and becoming a sort of dialogue between Nao and Ruth. There are a number of striking parallels in this novel, which I can't really discuss without giving away much of the show, and there are a number of ideas that pass through the pages -- environmental concerns, ethical dilemmas, the possibilities of different outcomes stemming from one choice or one act, the connections between our pasts, presents and futures, the pain, evil and suffering that exists in the world, and the idea that we need to live for the now.   But it's also a book about writing, reading,  -- and maybe most importantly along these lines, it's about a writer's hopes in finding just the right reader.

I'm the first to admit that I'm not very talented in the writing area, so it is really difficult for me to express how very much caught up in this book I became. I'm no literary expert, so I have trouble waxing on about all of things literary experts wax on about. I'm just a reader person, honest with no pretensions at all,  and I don't read to dissect, but rather to learn, to appreciate, and to find something that actually speaks to me.  Reading this book  wasn't simply about wanting to know what happened to Nao and to everyone else involved in this novel even though I did;  it wasn't that there is so much here philosophically that I think I could read it three or four more times and still come up with something new each time, even though there is.   There was just something about the examination of parallel lives across time and space and the connections between them that in Ozeki's very gifted hands, closed down the real world for me and took me into the world(s) that existed in this novel. That may sound stupid, but it's the only way I can really articulate how intensely I lost myself in these pages. If I were a writer, my guess is that I would appreciate that someone lost him or herself in a world I'd created; as a fiction reader, I can only say that it's my highest compliment to a writer.  I loved this book. Bottom line.