in which one person's hero is another one's villain: Everland, by Rebecca Hunt

hardcover - from the UK

(kindle version available in the US)

“If what actually happened and the perceived truth were contradictory, it hardly mattered. No one would ever know the difference.”

Here's how good this book is: I started it on my vacation, and even though I was stretched out on a balcony overlooking the beautiful Pacific on the Big Island of Hawaii, I could have cared less about the scenery while I was reading this novel.  I have a huge fondness for books about polar exploration, especially in Antarctica, where the action in this novel takes place. Moving back and forth in time across an entire century, Everland is the story of two very different groups of explorers who undertake two very different expeditions. The first, in 1913, is set in the heyday of British polar exploration; the second, marking the centenary of the first, takes place in 2012. Despite the passage of a full century, unmistakeable and eerie parallels exist between both expeditions.

In March, 1913, the captain of the British ship Kismet dropped the mate and two others off in a dinghy to begin their journey for a short stay at an unmapped island the mate christened Everland. The idea was that while the men, Napps, Millet-Bass, and Dinners, were exploring the island, the rest of the Kismet's crew would be sailing around Cape Athena "for a last geologizing excursion," and would meet back up with the team in just two weeks. The Kismet sails off, but immediately problems set in, beginning with a storm that made the four-hour dinghy journey last about six days; unbeknownst to the three explorers, the Kismet had also suffered in the same storm and had to stop to make repairs. It wasn't until April that the Kismet returned to take the three-man team home, but only one badly-frostbitten, nearly-dead man was found on the island. What happened on that island became the stuff of legend. In fact, one hundred years later, in celebration of another three-person expedition that is about to be launched to Everland from the Antarctic base Aegeus, the film night pick is a 60s "classic" called Everland, a movie the group knows by heart about the 1913 ill-fated venture based on the "famous book" written by the captain of the Kismet.  The novel goes back and forth between the two expeditions, chronicling the events during both. The similarities are notable -- the flaring resentments, the tensions, the dangers and ultimately the choices that are made among each team for survival echo across the century. 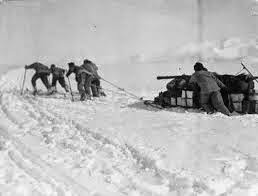 Both accounts are tension filled and downright distressing in parts. Yet, while there is plenty of action going on,  even more interesting is the idea running through the book of the distortion of reality.  Here the truth is based on collaboration and self-serving motivations, while the reality of what actually happened during these expeditions is left behind forever on Everland -- leaving the altered version of events  to be passed down as  history and fact.    As a result, reputations are made, both positive and negative. In the case of the 1913 expedition, the reader is first given the modern-day understanding of events that coincide with the book written by the captain and then the movie, but throughout the story, the author fills us in little by little about what actually happened to these men.   In the second expedition, the situation is not only manipulated by one of team members,  but after a particularly dramatic scene, a deal to elevate one story over another is tacitly agreed to for reasons particular to and kept secret between the parties.

I bought Everland  thinking it was something along the lines of a Scott or Shackleton type historical fiction novel, but I got so much more. While the stories of both expeditions were intriguing,  for me the 1913 setting  was much more interesting. In terms of survival, both narratives were filled with tension, although the modern explorers came equipped with technology that the earlier ones could never have dreamed of, and they were only an airplane flight away from rescue, so that sort of lessened the drama for me. In setting up the often-striking parallels between the two, I suppose to some readers it might seem contrived (and I suppose maybe it is a little), but it works well.  More than anything, though,  I absolutely loved how the author let the idea of the distortion of reality play out through the novel, even before the reader fully comes to understand why and how it's important.  I also walked away with pity for the so-called "villain" of the piece, as the real truth turned the established history on its head.


I've only offered a bare-bones outline here; obviously there's much more to this book that I ended up absolutely loving.  I have to admit that things started out a bit slowly, but I hung in there and was greatly rewarded.  I also found myself backtracking to the chapter headings to keep the chronology straight, since not only does the book go back and forth over a hundred years, but within the 1913 time frame, it goes back and forth from the expedition to back on the Kismet.   Otherwise, it is  a very engrossing read that left me frustrated whenever I had to put it down. I'll be adding it to next year's book group reads.  Highly, highly recommended.