from the crime segments: In which academia, art and mayhem lead to The Case of the Sharaku Murders, by Katsuhiko Takahashi 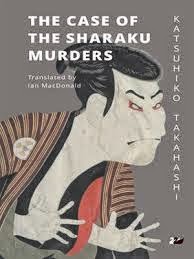 The Case of the Sharaku Murders  is a selection of the Japanese Literature Publishing Project, and is only the first of a trio called the  "Ukiyo-e Murder Trilogy."  It begins on a dark and windy night with two men looking for someone along the cliffs on Japan's northeast coast near Tanohata, and having no luck.  A newspaper article four days later reveals that the missing man is Saga Atsushi, an award-winning calligrapher, chairman of the Tokyo Bibliophilic Society, scholar of ukiyo-e and a "central figure in the Ukiyo-e Connoissership Society," and that his body had been found floating in the ocean, picked up by a man on a squid fishing boat.  The verdict is suicide. But when more people start ending up dead, the police inspector investigating the case starts to wonder if perhaps there was more to Saga's death than meets the eye.

This book is not your usual crime read: about one third of the book is an exposition on the history of Japanese art, most especially Ukiyo-e, the art form represented on the cover. Once you get past all that, though,  there is twist after twist, and the payoff is a good, solid whodunit. Along with the history of ukiyo-e and a smattering of Japanese history,  it also explores the "dog-eat-dog world" of academia and the professional rivalries that exist within the art world.  As always, my chatty self has much more to say about it at my crime page -- here's the link.