just checking in -- middle of the month and all that, and an official "surprise" 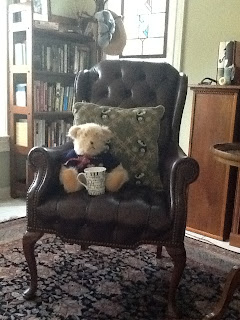 It's the 18th of September and  it's probably going to rain today, so it's another fine reading day. That's one good thing about living in the land of stormy weather -- lots of reading ambience. Throw in a freshly-ground cup of coffee and some Charlie Parker to make it an ideal day.
September:  American Rust,  by Philipp Meyer
Oct:   The Girls of Atomic City, by Denise Kiernan
combined Nov/Dec:  Crusoe's Daughter, by Jane Gardam
January:  The Cat's Table, by Michael Ondaatje
February:  Empty Mansions, by Bill Dedman and Paul Clark Newell, Jr.
March: Burial Rites, by Hannah Kent
April:  How It All Began, by Penelope Lively
May:  Sandrine's Case, by Thomas H. Cook
June:  Philida, by Andre Brink
I love the people in my group, but sometimes it's tough, even with their input, to find books to satisfy everyone.  A couple of people don't like to read anything beyond 300 pages, some prefer nonfiction, and some of the women have told me that they don't like "unhappy" fiction (try to find "happy" fiction that doesn't classify as chick-lit -- it's impossible) because of all the crap going on in their lives.  One woman wanted to read Shakespeare plays, and I have to say that I think it's not such a hot idea, considering some of them had a hard time with Jane Austen because of language issues.  Aaarrgghh!  I find myself going a little middle of the road to try to please everyone -- but as Larry keeps telling me, I have a lot of other books to read that have nothing to do with the book group.  He's so right.

That's about it for now -- oh wait! This just in via email: The Man Booker Prize has officially announced "expansion" -- not that I care, but someone might:

"From Chicago, Sheffield or Shanghai the Booker Prize Foundation announces changes to the rules of eligibility for the Man Booker Prize to celebrate and embrace all authors writing in English.
The trustees of the Booker Prize Foundation have today (18 September 2013) announced that the Man Booker Prize is to expand eligibility for entry for future prizes to include novels originally written in English and published in the UK, regardless of the nationality of their author.  This change will come into effect for the 2014 prize. The Man Booker Prize trustees are confident that their decisions are in keeping with the increasingly international nature of publishing and reading and believe that these changes will encourage traditional and new publishers alike, and bring yet more excellent literary fiction to the attention of readers around the world."
Well, this news ought to keep people busy arguing for a while and the tweets coming in!
-- ta