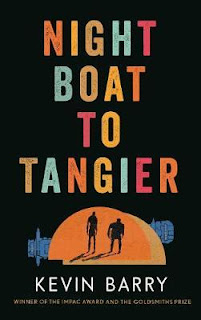 "There's grief, and the longer we go on, the more of it we've the burden of."

"You look for quiet spaces in a life, Charles. And do you find them?"


I couldn't wait for the US publication of this novel, which happens September 17th,  so off to the UK it was for me via an online purchase.  Money well spent, as it turns out; when I finished it, I noticed my spouse staring at me like "what?" because I was a wee bit choked up on turning the last page.  It is such a fine book, really -- sad and moving with more than a touch of black humor, and for me, excellent. Then again, it's the work of Kevin Barry we're talking about so no surprise there.

It's October 2018, and two men "in their low fifties" are sitting on a bench at the ferry terminal in the Spanish port of Algeciras, a place with a "haunted air, a sinister feeling" that "reeks of tired bodies, and dread."  Maurice Hearne and Charlie Redmond are men for whom


" The years are rolling out like tide now.  There is old weather on their faces, on the hard line of their jaws, on their chaotic mouths. But they retain -- just about -- a rakish air."

Maurice has a "jaunty, crooked smile," that appears "with frequency."  Charlie's face has an "antique look, like a court player's, medieval, a man who'd strum his lute for you... Hot adulterous eyes and again a shabby suit... Also, stomach trouble, bags like graves beneath the eyes, and soul trouble."

They are awaiting  Maurice's twenty-three year-old daughter Dilly, from whom he's been estranged for over three years. They've been told that she'll be headed for Tangier on the titular Night Boat or "possibly coming back" from there, and  while they wait they pass out flyers with her picture on them, look for and harass "crusty types" who might know something about Dilly.  We meet them as they are looking


"blithely at the faces that pass by in a blur of the seven distractions - love, grief, pain, sentimentality, avarice, lust, want-of-death."

As "the hours melt one into the other," during this "lizard night,"  they also spend time reflecting on the past.  Exactly how these two men have come to this point  is revealed via a series of flashbacks that encompass these "seven distractions" while recounting how their years  in the drug trade not only made their fortunes, but also took a tremendous toll on their lives and those of the people closest to them, leaving no one unscathed, most especially Dilly and her mother Cynthia.


Night Boat to Tangier is many things, the history of a friendship, a story of love and loss, but most especially it is a tale of the past that continues to haunt the present, in more ways than one. It is


"a tremendously Hibernian dilemma -- a broken family, all the melancholy rest of it..."

and while it can verge into the morose and become brutal in places,  there's also a sort of humorous, witty edge that offsets things so that you don't find yourself stuck deep in "all the melancholy rest of it"  the entire time.  The back-and-forth bickering/repartee between Charlie and Maurice ranges between funny and heartbreaking at times, then there's the story of Maurice's doomed building site which just may be a fairy fort, two men watching tv and mouthing the words to Rumblefish while in a mental hospital ... sometimes you can't help but laugh.

As with the two men waiting in the terminal whose stories manage to entrance some of their listeners, Kevin Barry has "woven a ring" that "shimmers" here, one that is "made of these odd, circling words."  The man is truly a gifted storyteller.

I loved this beautiful, haunting book.