Out of Darkness, Shining Light, by Petina Gappah 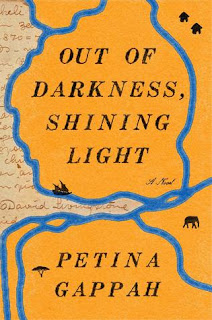 Without wasting time, the author reveals right out of the gate what we are about to read:

"This is how we carried out of Africa the poor broken body of Bwana Daudi, the Doctor, David Livingstone, so that he could be borne across the sea and buried in his own land."

As our narrator reveals, this is a story that "has been told many times before, but always as the story of the Doctor."  This time around, however, those whose voices have not been heard have their say about their roles in Dr. Livingstone's "last journey" from Chitambo to Bagamoyo, a place whose "very name means to lay to rest the burden of your heart."   It was a journey of over 1500 miles and 285 days, as revealed via two narratives: first that of Halima, Livingstone's cook, followed by an account kept in a diary by Jacob Wainwright, a freed slave who had been taken in and educated by missionaries early in his life.

As we are told before the first chapter even begins,


"On the long and perilous journey to bring him home, ten of our party lost their lives. There are no stones to mark the places where they rest, no epitaphs to announce their deaths. And when we who remain follow where they led, no pilgrims will come to show their children where we lie. But out of that great and troubling darkness came shining light. Our sacrifice burnished the glory of his life."

With only minor complaints, overall it is a fine novel, and some of the comparisons to Laila Lalami's The Moor's Account made by readers is not too far off the mark here (although I liked Out of Darkness Shining Light more), as her book also put the voices of those who followed in the shadows of more famous historical figures front and center.  I love this sort of thing, really, when done well.  Halima's account begins prior to Livingstone's death at Chitambo and ended all too soon for this reader; Wainwright's rather stifled, pious journal entries purposefully read like Bunyan's Pilgrim's Progress, as he intends his diary for future publication.  Both, however, reveal that outside of  the singular cause of delivering Livingstone's remains to the coast, within the group there were conflicts based on ethnic and religious divisions, jealousies,  and much more.  The members of the caravan also faced hardships including disease, hunger, superstition from outsiders, fear of being captured by slavers and other horrors.  Throughout the book there are also ongoing questions about Livingstone's own relationship with slavery, and colonialism is put under the microscope here.  Wainwright's account of himself, his worldview, and his desire to be ordained in order to save his fellow Africans stands out as just one example, and his self-serving narrative  is often giggleworthy and eyebrow raising as we see him sometimes justifying what he does through the filter of his Christian beliefs.

Once I picked it up, that was it; any moment away from this book was spent thinking how quickly I could get back to it.  This novel was on the list of my own ten most anticipated books for the remainder of 2019 and I was not at all disappointed.  Recommended mainly for readers of historical fiction done well.  There's so much bad historical fiction out there, so it was a pleasure to read something so well researched and well written.