A "novel-bomb" ... Harbart, by Nabarun Bhattacharya 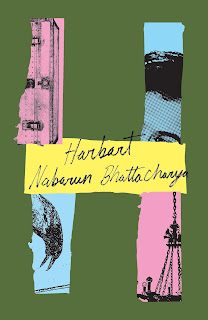 Every week I grab my copy of The New Yorker out of the mailbox, and before I do anything else, I turn to the "Briefly Noted" section for leads on new books to read.  [It's hell on the wallet, but so far I haven't been let down by my choices.]  In one of the July issues, I came across this title and knew I had to have it -- I just sensed it would one of those out-of-the-ordinary books I look for but rarely find.  I was so right.

This novel hits so many of my reader buttons it's unreal. Harbart is  political, gritty, loaded with satire and teeming with history, as well as social critique; it is sad but graced with a measure of dark humor that will leave you giggling when least expected,  and at times it not only teeters on the very edge of the fantastic, but gives it free rein.    It really is, as Siddhartha Deb says at The Paris Review website, "a novel that ticks like a bomb."  (FYI, Deb also provides the Afterword in this book, which is the same material found at Paris Review.)   It's also one of those stories where I enjoyed the dark humor but at the same time felt guilty for laughing.  I'm so impressed with Banerjee's translation -- it couldn't have been easy at all to carry this "novel-bomb" from its original Bengali to English with such relish and passion.

Without saying too much here, the novel begins with Harbart's suicide in 1992. From there it weaves its way through the story of what exactly prompted his death, introducing us to the main character who had lost his parents when he was just an infant.  His aunt is the only one who seems to actually care for him, along with his nephew Binu, who Harbart respects and admires.  As Harbart gets older, he becomes caught up in forces and events  greater than himself over which he has absolutely no control, a scenario which, by the way,  the author mirrors in the story he tells of Calcutta over Harbart's lifetime.   It is the death of this beloved nephew that strikes Harbart to his core and leads to his newly-found career as someone who can speak with the dead, a vocation that will eventually lead to  some unforeseen consequences of its own.

While the story itself is a great one and Harbart is one of the most hapless but lovable characters I've come across in a long time, there is so much more to be found here.  Siddhartha Deb notes in the Afterword that "Harbart's character does not encompass the novel as a whole," and that it focuses more on relationships


"between the individual and the scattered collective, between revolution and the afterlife, between cockroaches and fairies."

At the same time, "it is always about language."  So true.  So very, very true.  The author's writing is described on the back-cover blurb as "anarchic," which describes it perfectly.

With afterword and translator's notes, this book runs to only 122 pages, but don't let that fool you.  I started reading this book late one afternoon, but the 70-something pages I'd read replayed in my head over and over and over again until I actually got up at 4:30 in the morning to finish it.  That's  just the sort of novel it is.   I will say that for many readers it may be a challenge; as John Domini notes in his review at The Washington Post,  "the names alone can present a stumbling block," but sticking with it yields great rewards.  It is a book I will never forget; I am only frustrated because my few words here don't even begin to do it the justice it deserves.

I loved this book.