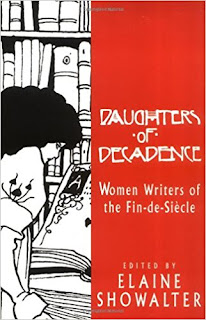 "It is just when a man begins to think he understands a woman that he may be sure he doesn't!" -- Edith Wharton, "The Muse's Tragedy"

Elaine Showalter begins this most excellent book with the observation that  when we stop to consider "the literature of the fin de siècle, the writers who come most readily to mind are men."  She has a great point -- I own quite a hefty library of fin-de-siècle literature and sure enough, all of the books I own,  without exception, are written by men, although I will say that I've started to remedy that problem as I was going through this book and looking up author biographies and bibliographies. She goes on to say that while "women were a major presence in the new literary world of the 1880s and 1890s," they had also been "overshadowed" not just by the major male novelists of the time (Conrad and Wilde are the examples she offers here), but also by those she calls "minor novelists," such as Stoker or Haggard.  The women represented here (and others writing at the time) were writing


"with unprecedented candour about female sexuality, marital discontent, and their own aesthetic theories and aspirations; and speaking to -- and about -- the New Women of the fin de siècle."

According to Karen M. Offen in her book European Feminisms, 1700-1950: A Political History, the term "new women" had been in existence elsewhere in Europe since the 1830s, but for our purposes, it had "reemerged in English from a published debate between the British novelists Sarah Grand" (whose work appears here) "and Ouida in 1894," and that the importance of these "New Woman literary works" lies in the fact that


"their authors addressed issues ... about the constraints of marriage, about work, about the possibilities and difficulties of self realization..." (189),

in short, about the growing dissatisfaction among women re the restrictions put upon them by Victorian society.

Daughters of Decadence contains seventeen short stories and other brief pieces by thirteen of these women, both British and American;  there is also a brief chapter containing a send-up* of George Egerton's "A Cross Line" published by Punch which, according to Showalter, "gives a good sense of the ways Egerton's view of feminine nature shocked and startled readers of the 1890s."

With one exception, the stories in this book were all completely new to me as I opened the cover, and it is truly a treasure trove of great writing. Truth be told, aside from Kate Chopin, Vernon Lee, Charlotte Perkins Gilman, and Edith Wharton, I hadn't read a single thing by any of these of authors; even the ones I just mentioned have been limited to a book or a story here and there but that's about it. I've listed the contents below without any discussion; there are three stories which were my particular favorite. First,  "A White Night," by Charlotte Mew, which takes place in an old Catholic church in Spain while a wife, her new husband, and her brother are touring the countryside while the newlyweds are on their honeymoon.  It's not so much what happens in this book that's behind why I enjoyed it so much (although I must say, it was pretty horrific and the setting heightens the reading experience)  but rather the outcome as husband and wife are later going over what had happened there. If ever this book provided an eye-opener, well, it's found in that story.  In second place on the favorites list, "The Muse's Tragedy," by Edith Wharton, which is just plain sad, but actually reveals an awful truth; and finally, "The Fifth Edition," by Mabel Wooton, which focuses on an "exploitative male novelist" who is asked to look at an autobiographical novel given to him by its female author.  Like most works of the  fin de siècle, the rather uneasy relationship between art and life is a major theme here, as it is with many of the stories in this book.   Just as an FYI,  Wooton's tale is not the only one featuring a woman writer and her relationship with a male author -- Vernon Lee picks up this idea with her splendid Lady Tal, as does Constance Fenimore Woolson in Miss Grief, both of whom had Henry James in mind while writing their stories.


"a century later the utopian dreams of fin-de-siècle  feminists have yet to be fully realised, but reading their stories we can take heart from their talent and courage to look with hope to the new century, and to another beginning of a new world for women."

There is this great scene in Olive Schreiner's "Three Dreams in a Desert" which sort of speaks to the overall book as a whole in terms of what these women were trying to accomplish through their writing.  A woman coming out of the desert  is looking for "the land of Freedom," and must, as part of her journey, cross a "dark flowing river."  When she asks about a bridge, she is told there is none, that the water is deep and the floor is worn."  She might "slip at any time" and be lost.  When the woman asks for the track to show "where the best fording is," she is told that "It has to be made."  That's exactly what I felt after finishing this book -- that these women had helped create a new path, knowing all the while that the journey wasn't going to be an easy one.


The table of contents:

"An Egyptian Cigarette," by Kate Chopin
"Theodora: A Fragment," by Victoria Cross
"Suggestion," by Ada Leverson
"A Cross Line," by George Egerton
*"She-Notes," by 'Borgia Smudgiton'
"By Accident," by George Fleming
"The Buddhist Priest's Wife," by Olive Schreiner
"The Yellow Wallpaper," by Charlotte Perkins Gilman
"A White Night," by Charlotte Mew
"The Fifth Edition," by Mabel E. Wooton
"Miss Grief," by Constance Fenimore Woolson
"Lady Tal," by Vernon Lee
"The Undefinable: A Fantasia," by Sarah Grand
"The Muse's Tragedy," by Edith Wharton
"Emancipation: A Life Fable," by Kate Chopin
"Three Dreams in a Desert," by Olive Schreiner
"Life's Gifts," by Olive Schreiner
"The Valley of Childish Things," by Edith Wharton