The Beguiled, by Thomas Cullinan 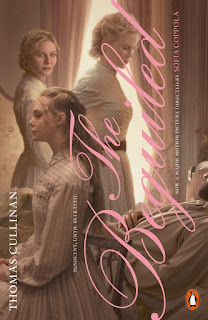 I actually read this book some time back but I haven't forgotten it, and neither will anyone who decides to read this novel.

As the blurb tells us, we find ourselves in Virginia,  "during the height of the Civil War."  The residents of the Miss Martha Farnworth Seminary for Young Ladies find their routine interrupted when thirteen year-old Amelia Dabney is out picking mushrooms one day and comes upon a wounded Union soldier. Surrounded by cannon fire, she helps him to his feet and takes him to the school.  Corporal John McBurney tells her he'll be there long enough to get his injuries tended to,  and then he'll leave immediately and "be no further trouble."

That's what he says, but as the story progresses, we learn that we can't always take McBurney at face value. Far from it. As each of the women and the girls at the house interact with him, his presence interrupts the regular, familiar routine of the house, and worse. He preys on each of these women/girls psychologically; his manipulative behavior makes already-existing but simmering rivalries come to the forefront and in some cases explode; it causes deep and dark secrets to be revealed, and sets off of a bizarre chain of events that no one could have predicted. Wait.  I take that back -- the one person who realized from the beginning that "You chil'ren have brought destruction in this house" is the slave Mattie, who sees McBurney for what he really is, but who cannot convince the rest of the women otherwise before it's too late.

The story is related through the alternating points of view of the small group of females at the school, which gives it a much more complete feel than it may have had from a third-person narrator alone. As perspectives shift, we start to realize just what it is about each person's psyche or past  that draws them to McBurney;  we also get different interpretations of the same events, which are often misinterpreted, bringing in a fuller picture of exactly what's going on in the house. And just as the school is isolated because of a war that has divided the country, the divisions within also serve to isolate its residents until they are forced to come to a consensus over what needs to be done to bring things back to the way they were before.  The question is, though, how can any of these lives ever be the same again?

The Beguiled is a page turner of a great book, and Cullinan is a master of ratcheting the psychological tension to the point where I couldn't put it down. Unlike a LOT of readers, I thought the alternating points-of-view approach was a great one.  And also unlike a lot of readers, I didn't judge the novel on the old Clint Eastwood film made from this book, which was nerve wracking, for sure, but very different from the original story. There's so much psychological tragedy going on in the novel, and while the film version didn't spare the horror, it's of a different variety altogether than what's in the book.

Very highly recommended -- I was just floored after finishing it.
Posted by NancyO at 2:27 PM