The Adventure of the Busts of Eva Perón, by Carlos Gamerro 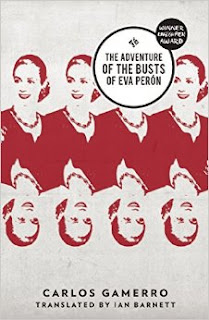 "all of us have our 17th October in our lives, and his was knocking on the door."

There aren't many books where this happens, but I didn't even make it to the end of page one before I realized that this novel and I were going to get along just fine.  The Adventures of  the Busts of Eva Perón has everything I want in a book -- intelligence, history, and of course there's the black humor that kept me laughing most of the way through it.  There's nothing like sitting at your vet's office in a crowded lobby and laughing out loud while everyone's staring at you, but I couldn't help myself.  It may not be a book to everyone's taste, but I absolutely loved it.

The novel begins when Ernesto Marroné, the "financial manager of the most powerful construction and real estate conglomerate in Argentina," returns home from an afternoon of playing golf and discovers a poster of Che Guevara hanging on his son's bedroom wall.  As he "unknotted the laces of his Jack Nicklaus golf shoes," he realizes that it may be time to reveal his own "guerrilla past" to his son. After all, "there's no escaping the past" --


"No matter how far you run, sooner or later it catches up with you -- with all of us. Because far from being an exception, Marroné's story was emblematic of a whole generation -- a generation now striving to erase the traces of a shameful past with the same diligence it had once devoted to building a utopian future."

He makes up his mind to tell his story the next day; and that night he laid back, unable to sleep, watching "the film of his rebellious past from beginning to end..."  The novel consists of Ernesto's look back --  it is all at once a wicked satire on politics and history,  a look at the mythology of Eva Perón, and a story about one man's personal journey.  And, as is obvious from all of the tabs on the page sides, I thought it was really, really, REALLY good. 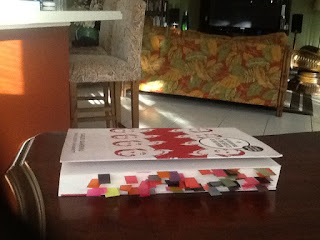 His account begins with the kidnapping of his boss, Sr. Tamerlán,  the owner of the factory where Ernesto works as head of procurement. Tamerlán had been at the factory since he was ten, arriving on 17 October 1945, which, incidentally,  is a date in Argentine history that continues to resonate as a turning point in the country's history.  In a nutshell, on that day, there was a huge rally by the working classes in front of the presidential palace at the Plaza de Mayo to demand the release of then Secretary of Labor Juan Perón, who had been arrested and imprisoned. The workers' demands were met, and their success launched Perón's political career and his marriage to Eva Duarte, the "Evita" of popular myth.

The kidnappers have sent one of Tamerlán's fingers, but they've also made a bizarre ransom demand: they want a bust of Eva Peron placed in every office.  Marroné, who decides that this could be a great opportunity for much-desired advancement, takes on the task of acquiring the 92 busts.  In his mind, aided by his reading of several books written for managers who want to get ahead in their careers (The Corporate Samurai, The Socratic Pitch, How to Develop Self-Confidence and Influence People by Public Speaking, Don Quixote: The Executive Errant, etc.) he realizes that he is at a turning point, one where after all was said and done, he'd be a hero:


"And that night, of all nights, on the eve of his new life - a life of adventure, a life in which his dreams would begin to come true - it had called out to him, to pass on its message of encouragement, and his hand had reached for it. This was what he had been waiting for, he saw it clearly now. Tomorrow, when dawn broke, Ernesto Marroné would go out into the world. Who knows who would come back?"

The next morning he heads off to the Sansimón Plasterworks to make the order.  But he's in for a huge surprise -- on that day the workers have decided to occupy the factory -- it seems that his order for the busts, needed in a hurry, had caused the "comrades in the workshop" to do the job piecemeal, forcing them to "bring the occupation forward."

What happens next takes the reader deep into the surrealistic zone, as a gradually-despairing Ernesto finds himself trying to get things under control at the factory so that his order can be filled and he can be the hero who saves Tamerlán's life. He  steps into the shoes of Don Quixote, becoming a regular knight-errant based on what he's memorized from his management self-help books. His mission, as he sees it, is to


"... carry the spirit of Eva, embodied in her busts, to the very heart of the corporation."

He sees himself as "neither us nor them...the chosen one, predestined, belonging to both worlds.  Like Eva, he was a bridge."   His adventure doesn't end with the factory though; as he's wandering through the shanties of Buenos Aires, he stumbles into a place where Eva truly lives on and has the power to fulfill any fantasy desired.

After I finished this book, a saying of Marx's popped into my head, something along the lines of history repeating itself first as tragedy then as farce, and there may be something to that here in this most excellent novel.  I can't possibly describe everything here;  it's a book a person must absolutely experience on his or her own. I will say that knowing a bit about Argentina's 20th-century history would be beneficial and things might make much more sense (especially in terms of the Peronists, still active and still a big, ongoing part of the political scene today). Otherwise, this is a book I absolutely loved -- aside from its silliness, it is a story with an incredible amount of depth, highly intelligent, and one I hated putting down for any reason.  Most highly recommended.
Posted by NancyO at 10:11 AM