Read the book and then go watch the film -- The Blue Angel, by Heinrich Mann 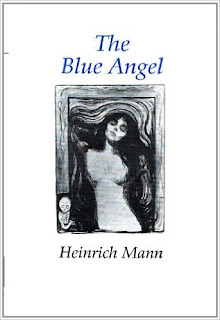 This morning I sat down and watched the movie that was based on this book not knowing what to expect. It was made in 1930, starring Emil Jannings and Marlene Dietrich, and it is seriously one of the saddest and most tragic movies I've ever seen.  I felt so sorry for Jannings' character, Professor Rath, and just sat there stunned during the last few scenes.  That wasn't so much the case after finishing the book yesterday;  I didn't know whether to pity the man (who in this particular translation is known as Mut, even though the original novel has him as Professor Unrat) or to despise him.  Since he's Mut in this version, I'll refer to him as such here.


"His name being Mut, the whole school, of course, called him Mud."

He can't walk through the school or the town without someone saying something about the smell of mud, or that there seems to be "mud about the place," and over the twenty-six years he's been teaching, he's taken mental note of both the insult and the person delivering it. He knows that his students hate him, and since he's been in the same town and same school for so long, he also realizes that "sometimes the hatred was a family legacy."  He is known as "Old Mud," and it is not uncommon for the epithet to be used in his presence among most of the people in the town, which was still full of his former students, "boys whom he had caught or had not caught yelling his nickname." For Dr. Mut,


"The schoolgrounds did not end...at the encircling walls; they extended to the houses round about and included all classes of inhabitants."

Inside the classroom, he doesn't understand that boys will be boys:


"laziness was equivalent to the worthless of a ne'er-do-well and disrespectful laughing at a master was a revolt against authority and law, while a boy letting off a squib was perpetrating an act of revolution, and an attempt to cheat meant a ruined future."

The one boy he despises most is Lohmann, aged 17; for one thing Lohmann refuses to respond to Mut's tyrannical rages; instead, looking at Mut with "quiet contempt, and even a spice of pity ... in his disgust."  However, reading closely, it seems as if he feels Lohmann looks down on him -- Mut  notes early on that it felt as if Lohmann "were laughing at him," and he was "determined to show the rascal that he was the better man of the two."   Mut cannot abide even the slightest hint of insubordination -- he is the perfect authoritarian.

When he discovers that a group of his students that includes Lohmann has become interested in  a woman named Rosa Frölich, he decides to try to find her, to "interfere."   Wandering the streets of the town, though, just brings out his rage, his hatred and a persecution mania. He passes by a cafe where the proprietor is a former student. Shops are filled with "rebellious students,"  there are places with signs bearing names of old students,  all of whom he feels are challenging him, defying him, -- "on every side enemies."  He even turns his eyes away at the nameplate of a colleague who knew that Mut's son had taken up with a "woman of doubtful character," and had told people about it.  He feels "as if a class of some fifty thousand mutinous scholars was shouting round him."   All of these feelings get mixed up with his attitude toward Rosa Frölich, whom he finally finds at the Blue Angel, an old house now repurposed as a club. Taking his seat in the concert hall along with the rest of the audience, he listens to her sing, and despite himself, finds that he is applauding her along with all of the others. But when he meets her and tells her to "leave this town," he quickly discovers that his authority and hard-handedness has no effect, in fact, she's rather indifferent to him.  He realizes that


"... this was no naughty schoolboy, disobedient and meet for punishment, as were to him the inhabitants of the little town. No, this was something new."

What started out as the intention of getting rid of her corruptive influence on his pupils (and in his mind, on the morals of society in general),  leads to him actually spending more time with her, as he becomes not only fascinated by Rosa, but actually obsessed with her. His obsession, although he doesn't know it yet, will fuel his fires of long-desired revenge for those who have "dared to defy his authority,"  and set him  on a path from which there may be no return. 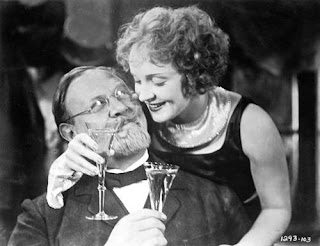 Seeing the movie is not at all reading the novel.  The movie, while just amazingly good, is incredibly tragic, but takes the professor in an entirely different direction from Mann's novel, and doesn't really capture the true essence of the book.  In the novel we watch a tyrannical figure who has always been "zealous for all forms of authority," a man who has a "narrow code of ethics,"  ultimately "call on the mob to set fire to the palace,"  becoming a person who "lets loose anarchy," out of his desire for what he feels is just, right, and what he's owed.  Here the very seeds of his own fate are sown in his obsessions.   At the same time, it seems to me that this may also be a commentary on the kind of society that allows what happens in this story to happen.

The Blue Angel is a wonderful book that I'm adding to the list of those novels that are just unputdownable -- again, it won't be for everyone but it is one of those books that  will float in my head for a long time. The same is true for the film -- but read the book first.
Posted by NancyO at 4:21 PM