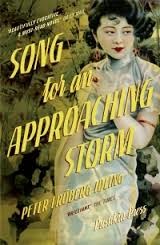 
I don't actually remember why I bought this novel but I'm certainly happy  that I did. It is a book that reminds me why I love small presses like Pushkin --  they don't have to take a mass-market approach and so have the space and flexibility to publish some excellent fiction. And when I say excellent, I mean it - considering that this is the author's debut novel, he's done a great job here. For people like myself, who are always on the lookout for intelligent historical fiction that rises above much of what's available on the mass market these days,   Song for an Approaching Storm is perfect -- it's intelligent, interweaves real historical events, and captures only a tiny, but extremely important slice of time on the world stage.
The novel transports the reader to Phnom Penh, Cambodia, just prior to, during and after the country' first election in 1955.  It is an uneasy time; it hasn't been too long since Cambodia became an independent nation and political tensions are at an all-time high. The novel is related from three different points of view: first, from Saloth Sar, who will later go on to become the notorious Pol Pot ; Cambodia's deputy prime minister Sam Sary  takes the second part, while the woman who intersects both of their lives, Somaly (based on the real-life Soeung Son Maly)   gets the final say.  While I'm not going to go into this book in any great detail, I think the way Idling structured this novel was brilliant, affording more of a three-dimensional approach from three very different people.  Each helps to underline the issues that existed in this recently-independent nation -- for example, Sar's narrative opens onto a clandestine meeting with a small circle of fellow Communists who are stuck between party rhetoric and actual practice.  Each of the three points of view have to do with the future -- as Sary notes,


"After having been fixated on the past -- the golden age, injustices and so on -- the nation is now suddenly ready to turn and face what is to come."

For all three of these people, "what is to come" is of paramount importance, both personally and in the context of a Cambodia free of its former masters.

The writing is absolutely beautiful, and the book is very easy to read &  understand. Even if you know absolutely nothing about Cambodia's history, there's no way you can fail to pick up the nuances of this tumultuous period of time since the author makes things very clear. On my part, reading Song for An Approaching Storm led me to Philip Short's so-far most excellent Pol Pot: Anatomy of a Nightmare, in which he uncovers the idealist Saloth Sar and slowly but thoroughly maps his eventual change as he becomes the genocidal  Pol Pot.  I'm not saying this will happen to everyone, but, well, I'm kind of a nerd so I was interested enough to buy a copy.

All I can say is that Song for An Approaching Storm is a most excellent novel, but honestly, it's probably not one of those books that's going to find its way to the general public. I can certainly recommend it to readers of serious historical fiction and to people who may be interested in the topic; I think it's one of the most intelligent novels I've read in a very long time.  To reuse the cliché, I simply couldn't put it down.
Posted by NancyO at 1:21 PM