*kicking off the search for the great american novel: The Coquette and The Boarding School, by Hannah Webster Foster (ed. Jennifer Harris, Bryan Waterman) 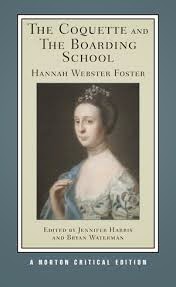 Hannah Webster Foster was born in 1758 and lost her mother at the age of seven. Very little of Foster's life is known, but in a nutshell, after completing her education, she became a part of Boston's literary scene.  In 1785 she married Reverend John Foster, and then moved to Brighton, Massachusetts. She had six children and did her duties as mother and the wife of a minister, but still somehow found time to write.  She kept literary ties with Boston, but after her husband's death in 1829, she moved to Montreal, and died at the age of 81 in 1840. Foster served as an inspiration to a number of women writers, including her own daughters.

In this edition, 263 pages belong to Foster's actual works The Coquette and The Boarding School.   These are followed by a section that puts The Coquette into better perspective by examining the real-life woman (Elizabeth Whitman) upon whom Foster's main character (Eliza Wharton)  is based: first, through her actual letters, then there is an account of the newspaper articles that covered this woman's death. These are followed by a small excerpt from an earlier work called The Power of Sympathy, by William Hill Brown (which I'm planning to read next)  that includes a mention of Elizabeth Whitman, and a poem by "the late unfortunate Miss Whitman" herself.  A third section explores Foster's "Nineteeth-Century Legacy," and finally, section four explores various scholarly works of commentary on and criticism of the two books contained in this volume.

Told in epistolary format and from multiple points of view that allows for a much more candid perspective from the letter writers, on the surface The Coquette reads like a story about a girl from a good family in Boston, someone from a high level of society, who falls for a bad boy who is known to use women then toss them aside.  The titular "coquette" is Eliza Wharton, who, as the story opens suddenly finds herself with some measure of independence after the man she was to marry dies. Mr. Haly, her intended, was not Eliza's choice as husband, instead, their would-be union was decided for her and because of her "nature and education," it had been "instilled" in her mind that she should be obedient "to the will and desires" of her parents.  Eliza goes to New Haven where she is introduced to Mr. Boyer, another reverend who soon starts wooing her, to the delight of the friends with whom she's staying.  But Eliza's mind is on having fun and enjoying her independence.  When she receives an invitation to a ball from a Major Sanford, she accepts.  While Boyer has marriage on his mind, Sanford is thinking something entirely different; Eliza keeps Boyer at arm's length  Eliza's family and friends all try to warn her off and to promote the virtues of Mr. Boyer as a potential husband; she however isn't ready to settle and has other ideas about her exploring her newly-found freedom.

As I said, there's the story on the surface and then there's what lies underneath. Since this book has been studied, analyzed and re-analyzed by scholars, I'll just offer a few themes I picked up on here.  First, there's the concept of freedom and independence, timely in a Colonial America that by the time of The Coquette's publication had only won its freedom a decade or so earlier -- what does those terms mean exactly, especially given one's gender and social status? Does one need to set limits on freedom?  Another message that comes through loud and clear is the often-oppressive expectations  of society vis a vis women's roles, and the standards that differ between men and women.  For example, while Eliza slowly comes to be known as a "coquette" -- in modern parlance, a flirt, which she is most definitely not but rather  a woman who wants to take her time before making any sort of commitment --   she finds herself being chastised by her friends, by Boyer, by her own mother; on the other hand, Sanford, who is referred to as a "rake" or "libertine"  may be looked down upon in some circles, but he's still invited to parties, to dinners, and able to court the daughter of a wealthy man whom he eventually marries for her money.  The scholars at the end of the volume do an excellent job in pointing out even more thematic material regarding this book, and there are entire websites dedicated to Hannah Foster Webster and her writing.

The use of letters here highlights  the closeness and long-standing strong friendships between females, allowing for them to be much more candid and straightforward with each other in their thoughts via the written word, which is one of the precepts taught by the headmistress in The Boarding School, the second story in this volume.  Not nearly as enjoyable as The Coquette, it is, however, its perfect companion.  Actually, in many ways, I felt like The Boarding School should have been presented first; by the time I got to The Boarding School, in many ways it felt like a bit of a rehash of many of the ideas presented in The Coquette.  The basic premise is that a group of young ladies are have finished their education at a school run by a Mrs. Williams which they've named Harmony Grove,  and are now called to attend several talks

"more especially designed to polish the mental part, to call forth the dormant virtues, to unite and arrange the charms of person and mind, to inspire a due sense of decorum and property, and to instil (sic) such principles of piety, morality, benevolence, prudence and economy, as might be useful through life."

In short, whatever Mrs. Williams felt "tended to enlarge, inform, improve, or amuse, she supposed worthy their attention."

Mrs. Williams would meet with these young ladies over the course of a week, and would provide discourse on several topics:  reading (where she expounded upon the specific dangers of reading novels), writing and arithmetic (and how it is beneficial to society for a young woman to have these skills), music and dancing,  miscellaneous directions for the government of the temper and manners, dress, politeness, amusements, filial and fraternal affection, friendship, love, and finally, religion.  During each and every one of these talks, she would provide advice, and then provide a parable about  someone who went against the grain of these teachings, then contrast that person's woes with someone who did as advised and went on to have a happy, fulfilling life.  The goal, it seems, is that these girls would remember her advice and when back home, would find themselves (or, as shown in the second part of this little book) or others in a particular situation where Mrs. Williams' words would come to mind and act accordingly. After leaving the school, the girls send letters to each other, describing this very thing, recalling what they'd learned at school and how the advice they'd received served them well.

Harmony Grove is an interesting place designed to foster not only the intellectual, but to also bolster the bonds between the girls who attended.  Reading it only at the surface  seems to yield nothing but advice on how to conduct oneself in the real world to which the girls will be returning.  However, looking a little more deeply, it seems that  these girls are learning how to depend on themselves and on each other as women who can turn to each other for support after their school days are over, in effect, allowing them to learn to become ever so slightly independent of men to a certain degree.  Again, the author promotes letter writing as the perfect vehicle of expression of their views.

The Coquette and The Boarding School  is my first true foray into the world of the writing of Colonial America, and I have to say that I was surprised that I enjoyed it so much. The Coquette is much more like a novel, and while modern readers may find it quite tame and wonder what's the big deal in terms of subject matter, it is  definitely worth reading for reasons mentioned above.  The epistolary format was actually a perfect way to get inside the characters' heads and although written some 200-plus years ago, it is very easy to read. The Boarding School is also worthwhile reading, although I wasn't nearly as fond of it as I was of The Coquette.     I have to say I was telling someone about this book to someone last week and they told me my face actually lit up while talking about it.  If I had the time, I'd spend a lot of hours thoroughly researching and reading about each of these works, but time is a valuable commodity right now, and I need to be moving on. The Power of Sympathy by William Hill Brown is next on deck, and I hope it's even half as enjoyable as this book.