The Madonna on the Moon, by Rolf Bauerdick 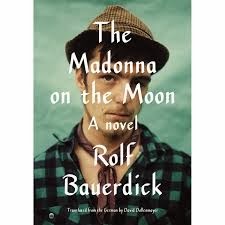 "The spaceflight of a dog opened up Pandora's box."


Nestled at the base of the Carpathian Mountains is a little village called Baia Luna. There's a small school, a church, and a little store that after hours becomes a taproom for the men. Close by there is also a chapel of  the village's patron saint The Virgin of  Eternal Consolation. The owner of the store is Ilja Botev, who lives there with his wife, his daughter, and his teen-aged grandson Pavel; Ilja's best friend is Dimitru Gabor, a gypsy.   As an older man looking back on previous events, Pavel provides the rather cryptic opening of this story, offering the reader a tantalizing hint as to what is to come:


"No one in Baia Luna had the slightest doubt that the source of Ilja Botev’s visions was not some luminous gift of prophetic insight, but the delusions of a wandering mind -- least of all me, Pavel, his grandson. When I was a little boy, I shrugged off my grandfather’s imaginings as foolish fancies, the result of the influence of the Gypsy Dimitru Gabor. Dimitru never gave much of a hoot about the laws of reason and logic. But later, as the solid ground of good common sense grew progressively thin and crumbly beneath Grandfather’s feet, I myself played no small part in the old man’s getting more and more hopelessly tangled up in the net of his fantasies. It was certainly not my intent to have Grandfather make himself the town idiot, the butt of everyone’s jokes, but what could you say about a tavern owner who sets off in a horse and cart on a secret mission to warn the president of the United States about the rocket scientist Wernher von Braun, a mysterious Fourth Power, and an impending international catastrophe? Armed, by the way, with a laughable top secret dossier, a treatise on the mystery of the corporeal Assumption of the Virgin Mary, handwritten and triple-sewn into the lining of his wool jacket."

If the author's purpose here was to provide the proverbial hook, it worked very well in my case. Sustaining the power of this opening was also successful, but then I got to the last one hundred or so pages and well, more on that later.

November 6, 1957 is a day that changes everything.  It's Ilja's birthday, and Sputnik II has successfully launched, carrying Laika the space dog along with it. While Ilja is less than impressed, noting that "The Russian beeping won't fill my belly, " the village priest Johannes Baptiste is greatly concerned, interpreting the Soviet interest in space flight not only as a search for the existence of God, but also for the Virgin Mary,  who, according to a declaration made by Pope Pius in 1950, "at the end of her earthly life was assumed body and soul into heavenly glory."  For him, it's the last straw, and he plans to speak about it the following Sunday as part of his sermon.  Pavel's worries are elsewhere, though. His teacher Angela Barbescu has disappeared.  The last time he'd seen her she'd made him hang a photo of party chief Dr. Stefan Stephanescu on a classroom wall, and as she's doing so, whispers to Pavel  "Send this man straight to hell. Exterminate him!"  When the priest ends up brutally murdered, questions over who did it and why begin to divide the village to the point where Ilja realizes "Baia Luna isn't Baia Luna any more," and that Sputnik "seems to have been a harbinger of the catastrophe that's now upon us."  Pavel sets out on a quest for answers and ultimately for justice,  putting him the middle of a  strange conspiracy that will follow him over the next three decades.  As Pavel is involved in finding out what really happened to Angela Barbescu and Johannes Baptiste, and as Ilja and Dimitru become partners in a "cuckoo idea of two crazy old men" trying to get the Americans involved in getting to the moon before the cosmonauts,  in the background this country (which is obviously Romania)  is changing,  and not all for the good.  There are corrupt party officials who will do whatever it takes to hang on to their power, and with the arrival of the regime of the "Great Conducator," things quickly go from bad to even worse.

There's so much in this novel to love -- the craziness of two colorful old men whose antics often made me laugh out loud, the people of Baia Luna in general and their responses to what's going outside of their pretty-much isolated world in the modern one, and the historical backdrop of a totalitarian regime -- all of these components, along with Mr. Bauerdick's nearly magical-quality writing and story-telling ability  make the book a highly entertaining  read.  Then I got to about the last hundred pages, where things start to change very quickly.  It's almost as if having been so deeply involved with the people of Baia Luna and the mysteries that are left to Pavel to take care of, the author just got tired. Where the writing before this point was vibrant and the characters filled with life,  it's like in the last one hundred or so pages he rushed to finish the book so that the characters came off sort of hollow.  Toward the very end, it's obvious that the author felt compelled to make sure that this book had a happy ending where everything is tied up in a perfect bow, but it was too pat, overly contrived,  and in making it this way, it's like the author lost whatever spark he had up until then. When I hear myself speaking out loud to an author saying  "please don't do this," well, that's a problem.

While I realize that there are readers out there who will come unglued without a happy ending of some sort, the way this novel ends was just wrong and not in keeping with everything that came before.  Up until then, it was headed for a top place in the one-of-the-best-and-most-entertaining-novels-I've-read category but ultimately, the consistency just wasn't there.  Then again, this is Mr. Bauerdick's first novel, so maybe if he writes a second, he can iron things out.  And even though I had a hard time with the last parts of the book, up to then I was in reading heaven.  I'm just a little disappointed with this one, but it was a great ride while it lasted.
Posted by NancyO at 2:02 PM