back in Barrytown again: The Snapper, by Roddy Doyle 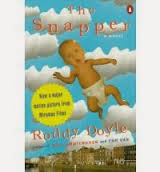 Not quite as entertaining as its predecessor, The Snapper is still a good read.  As in The Commitments, the plot is unraveled via the brisk dialogue and the action takes place within a working-class neighborhood;  unlike The Commitments,  the author takes his readers into Barrytown family life and more specifically inside the Rabbitte home.

Daughter Sharon Rabbitte, aged 20, is pregnant, and is keeping mum on the identity of the father, for reasons she doesn't care to discuss with anyone. A chance remark overheard in a pub sets off the Barrytown rumor mill,  leads to some embarrassing problems for Sharon.    Her father, Jimmy Rabbitte Sr., tries to be supportive, but also endures his share of headaches caused by the scandal and "Barrytown's sense of humor," which he and his daughter are both fighting. Her pregnancy and the resulting fallout  test both of their respective mettles, their individual senses of who they are, and also their relationship. In the meantime, life at the Rabbitte house goes on -- the twins, Linda and Tracy, adopt a dog that provides many comic moments and drive their mother Veronica up the wall by changing their minds so many times; Darren gets kicked out of Barrytown's cycling club so Jimmy Sr. starts one, Leslie won't get up in the morning, and Jimmy Jr. (of previous Commitments fame)  is honing his DJ skills upstairs.

While perhaps not as funny as The Commitments, The Snapper is still a joy and an entertaining look inside the lives of these people -- not just the Rabbittes, but their friends and neighbors as well all in this little slice of the city called Barrytown.   I particularly enjoyed the character of Jimmy Rabbitte Sr., and the way he often calls into question his role as a father and as the head of the household -- all done with punchy humor that needs no sentimentality for his character to be fully understood.  The comedy runs throughout --  there's a particular scene in the pub where a calculator giveaway had me laughing out loud, and another where Sharon and her friends are giving the poor lounge boy a hard time, and then there are the bits of every day life in the Rabbitte household which were the funniest for me -- but there's also a large measure of sensitivity in Mr. Doyle's writing.  Even the real father of Sharon's little snapper gets his due, despite the fact that the circumstances under which the baby was conceived bring Sharon a lot of anger and pain as she remembers what happened. The story isn't always pleasant reading, but it comes off as very real.

I don't get testy about  things like no quotation marks or the fact that this books is written in dialect -- okay, so that's the way the author writes.  Big deal. The bottom line is that I'm really enjoying Roddy Doyle, and he's a writer I'd definitely recommend.  Now on to the third book -- The Van.