The Abominable, by Dan Simmons -- an old-fashioned, rollicking good yarn

The Abominable ends my month of spooky Halloween reads, but this one fooled me.  I'm not quite sure where I got the idea that  The Abominable was going to be a horror novel, because as it turns out, it's much more of an old-fashioned adventure tale. The basic story is pretty good when all is said and done in that escape-fiction sort of way, complete with a group of climbers who find their way to Mt. Everest, a missing man last seen on the mountain, a beautiful young heroine, and a secret that someone is willing to kill to keep buried.  My only real issue with this book is that there is so much detail here that I felt like I had to put on my slogging boots to wade through it,  but more on this a little later.

The Abominable begins as Dan Simmons, in a nice metafictional twist,  finds himself in 1991 having to come up with a "new package" of novels for his publisher.  He really wants to do something on Antarctica, and as it happens, a friend of his wife's knows someone who went there with Byrd in the 1930s.  Simmons journeys to an assisted-living home to talk to the man, Jacob Perry, who is dying of cancer.  While he interviews him, Perry tells Simmons that there's a story he's always wanted to write -- not necessarily for publication -- just so someone will read it.  Leaving Perry with a Moleskin notebook, in 1992, Simmons gets word that 90 year-old Perry is dead, and is surprised to hear that Perry left nothing for him.  Flash forward to 2011, and Simmons receives a box of notebooks in the mail;  after having gone through them, he decides to publish Perry's manuscript, a "strange and oddly beautiful testament."

The story moves from 1924, where we meet the three main male characters on top of the Matterhorn, through 1925 where our erstwhile heroes find themselves climbing Mount Everest. It is while they are atop the Matterhorn in 1924 when the three, Jacob (Jake) Perry, Richard Deacon and Jean-Claude Clairoux, learn about Mallory's death on Everest.  As they are making their descent, Deacon asks them if they would like to accompany him on a "fully-funded expedition" to climb Everest in 1925, an expedition consisting of only the three of them.  They agree to go, then realize that the funding will be coming from Lady Elizabeth Marion Bromley, whose sons, Charles and Lord Percival (Percy) were once playmates of Deacon's when they were children.  It seems that Lord Percival had himself disappeared on Everest in 1924, although he was not a member of the Mallory expedition, and he had made no attempt to climb or camp with them.    A witness had reported that Bromley and an Austrian man, Karl Meyer,  were swept up in an avalanche, but Lady Bromley is just not certain that Percy is really dead.  Although she knows that it's highly unlikely he's still alive, she will  give them the funds and logistical help they need to find out why he was in Tibet to begin with, why he was on Everest, and why was he with Meyer when he died.  There's only one condition: she wants a family member, Cousin Reggie, to go along, and to keep track of all of the money.   If Percy's dead, she wants proof; if he's alive she wants him home.   Perry, Deacon and Clairoux eventually find themselves in Darjeeling, home of Cousin Reggie, where they begin what will be the climb of their lives.  But needless to say, there are a few twists along the way that none of them had bargained on. 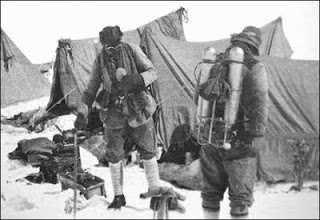 While I was reading this book, I kept thinking what a cool movie this book would be based totally on plot and characters.  It's very much reminiscent of old-fashioned adventure stories á la Indiana Jones (not the same plotlines but in that same vein), the kind where you just have to let that suspension of belief slip into play.  The characters may come off a bit stereotypical and even larger than life, but you know, this book is just a lot of fun, and should really be read not in comparison to the author's other works, but as a stand alone kind of rollicking good yarn.  Truth be told, I had trouble putting it down when I had to, that's how much I enjoyed it. But sometimes my fun was interrupted by the constant descriptions of ice climbing, mountain climbing, and the equipment necessary for both, as well as the numerous and lengthy passages describing the ice-covered cwms in Wales, the Tibetan landscape and pretty much each camp-to-camp ascent on Mt. Everest itself.  I think it could have benefited from some more judicious editing, but if I stack the sheer reading fun against the bog and slog, the fun comes out on top, even though I kind of figured out part of the plot way ahead of time.  I do think the Amazon reviewers who gave this book one star because it wasn't at all like  Mr. Simmons' past works aren't being quite fair, and while everyone's entitled to his/her opinion, they're being extremely harsh in this case.

If you're ever in the mood for an old-fashioned adventure yarn, you'll definitely find it here.  I try really hard not to judge one work of an author's on the rest, and to take each one individually on its own merits, and in this case, I found myself really liking the core story in  this one despite its flaws.  It's not a great work of literature, just fun, a story for a rainy day or two.   It won't be for everyone, but then again, which book is?

a special thanks to Em.
Posted by NancyO at 6:54 PM