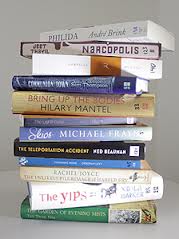 I was so happy this afternoon when my whacko mail lady brought me books #4 and #5, The Teleportation Accident by Ned Beauman and The Garden of Evening Mists, by Tan Twan Eng, both due to be arriving either today or tomorrow.   But to my very big surprise, when I unwrapped the package that was supposed to contain Garden of Evening Mists after opening the Beauman book, there was a big fat copy of Madame Bovary there instead.  My first reaction, of course, was an unabbreviated and very loud  "WTF???" which immediately made my little  blind dog Cleo bark because she knows when I use the "F" portion of that phrase, I'm not in a good mood and she was freaked out.  After getting her quiet by assuring her that everything was okay (which it really wasn't but her bark is as sharp as knives) I looked at the packing slip inside Madame Bovary, and sure enough, it said that I'd just received Tan Twan Eng's novel.  So since I ordered it from the UK, and it was like 8 pm there and likely after the close of business today, I have to wait until tomorrow to see how we're going to get this straightened out.  Another freakin' delay.

The good news is that I now have four of the unread BPLL novels -- The Teleportation Accident, Communion Town, The Unlikely Pilgrimage of Harold Fry, and Swimming Home, which I'm halfway through and absolutely loving.  Has anyone else read this one yet?  Another set of cheerful tidings:  Amazon UK sent me an email saying that a couple of the books that were originally scheduled to be sent in September should be here within a couple of weeks or so.

So that's my story today -- I wish I had finished Swimming Home so I would have something tangible to report, but I was in the middle of an ARC of Paul Auster's new autobiography (which is also amazing, review coming soon)  last night  until one a.m when I finally turned its last page.  One more promised novel and I can fully focus on the longlist.

Wish me luck with the book exchange...I have rarely had problems with the seller I used so I'm a little thrown off.

ADDENDUM: 2 hours later: I just checked Amazon and the lowest price for Garden of Evening Mists is now over $41!!! Crikey! I hope that pbshop honors the price it gave me ... 41 dollars isn't worth it for this book.

ADDENDUM:  24 hours later: Another day down the toilet with this book and solving my problem. An email was waiting for me from pbshop when I got up this morning, with questions I was supposed to answer. Took care of that, sent pictures.  Five hours later no response.  It's now almost 6:30 p in the UK and the business day is likely over -- a total waste of a day.
Posted by NancyO at 5:41 PM