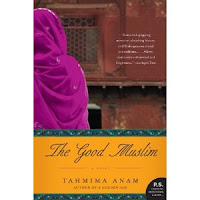 The end of East Pakistan's war for independence came in December  1971, bringing about the birth of the new nation of Bangladesh.  The effects of that civil war and its aftermath for this newly-independent country provide the backdrop for Tahmima Anam's newest novel, The Good Muslim, second in a trilogy beginning with The Golden Age. I've read a number of books by authors from India, Sri Lanka, and Pakistan , but this is the first novel I've read set in Bangladesh.  The book is set during the 1980s, but events of the 1970s are offered through flashbacks, telling the story of a brother and sister whose once close relationship is changed after the war -- they go into it together as freedom fighters and come out no longer part of the same world.  Their postwar experiences have shaped who they will be in the new nation -- one becomes a crusader for justice involved in the constant struggle to create a better world for everyone, while one loses faith in the world,  and makes it his life's work helping others to prepare for the next.

Maya and Sohail Haque are siblings who were freedom fighters during the war of liberation, but their postwar experiences have left them troubled and emotionally bruised.   Maya's medical talents were put to use at refugee camps performing abortions for women who had been victims of wartime sexual violence, while Sohail has an encounter in an abandoned army barracks that will trigger a major change in his life.  He returns as a changed and troubled soul, without the ability to express the horrors he's seen and lived through; the former guitar player, lover of Elvis and Rilke and debate-team star soon finds solace in his mother's reading of the Quran;  he now begins to turn toward the shelter  religious faith.   Maya doesn't understand the changes in her brother -- she doesn't understand that he's become a hollowed-out dead soul on the inside and she doesn't get why he's chosen religion when before they would look down on people who clung to "the Book."  Her anger and frustration increase when Sohail makes a grand symbolic gesture of renouncing his worldly self, and then marries a very religious woman named Silvi.  Maya believes it must be the fault his new wife and leaves home; she goes into her own self-imposed exile where she hopes to repay the debt she feels she owes to the lives she took by becoming a "lady doctor," roaming from place to place before settling in a conservative rural village, where she does a lot of good until one particular incident changes everything.  After receiving a telegram that Silvi is dead, Maya decides that it's time to go home to Dhaka and hopes for a reconciliation with her brother.

On her return, however, she finds that not only is her brother still living the religious life, but now he's become a popular leader of a congregation whose base is a shack on the roof of the family home and is even less accessible than he was before she left.  In the meantime, new on the scene is Zaid,  Sohail's little boy, who is lost and adrift after the death of his mother. It has really hurt him -- he acts out in negative behaviors as he deals with not only the loss of his mom, but also with the  lack of hands-on care he needs from his father.   Maya tries to help Zaid by spending time with him playing and trying to teach him things, but she really views her interactions with Zaid as a sort of inroad toward reconnecting with her brother. She believes that Zaid would be happy at a modern school, an idea that Sohail quickly negates, based on his own ideas as to how Zaid should be raised. Maya doesn't understand how Sohail can put his congregation's needs over Zaid's; he doesn't understand why she won't respect his wishes.  Whether or not some sort of harmony can be reached between Maya and Sohail -- between the conflicts of her secular worldview and his faith-based approach  --  is part and parcel of the substance of this story.  In the meantime,  Zaid is the one who ultimately bears the tragic brunt of the clash between these two very different worldviews.  Watching all of this sadness unfold as it plays out in the family home is the only stable figure in all of their lives, their mother Rehana, the common ground between the two. While their conflicts, challenges and their differing concepts of the needs of the people play out at home, the same is also occurring on a much broader scale throughout the country.

Obviously I've offered a very simplified synopsis, and there is much more to the story. I'll leave the analytical reviews and the subtexts, nuances and yada yada to the professionals; as a casual yet interested reader, however, my response to the novel is that it is well worth reading as it touches on some very important issues.  Most of them deal with the problems regarding peacetime conflicts that arise in trying to determine the direction of the country.  That aspect of the book, as well as the author's focus on women's issues,  has an immediate relevance to what's happening in the world right now, primarily in the Middle East.  I liked the book very much, but I did take issue with a couple of things.  First, Maya is the dominant personality here, the progressive crusader who has definitely done a great deal of good, especially in her work in small rural villages. Yet, considering that Sohail and his conversion are major components of this story, setting up the distance that grows between the two siblings,  there is very little coming from inside of Sohail's head.  Whether it was conscious or not, Maya's dominance results in an inequality that might move the reader away from appreciating Sohail's point of view, which seems sort of unfair to me.   Second, there are so many times when this story  verges into unnecessary melodrama that it broke my concentration.

Aside from my issues with this novel, it is a very good book that I would definitely recommend.


My thanks to Trish at TLC book tours!