Beheadings are the bookends of this historical fiction novel set in Annam (modern-day Vietnam) just around the turn of the century.  It is the first of these acts in 1896  that introduces the main character Tài as he and his family attend his father's execution.  By the time he witnesses the second, 16 year-old Tài has had to absorb more than most boys his age, and has had to grow up quickly.  The tale is related through the eyes of an older Tài, now in his late 70s. Along with plenty of adventure, love and revenge, Flesh is the story of how a boy's loyalty and obligations to his family lead him out of the small confines of his village into a bigger world where he discovers that things are not always as they seem on the surface, and that happiness and betrayal are often two sides of the same coin.

The story begins with the execution of his father in 1896 that sends Tài on a pursuit to find and retrieve his father's head for a proper burial, and to also to discover the name of his father's betrayer.  His younger brother dies when smallpox sweeps through the family village, and Tài narrowly escapes the same fate.  Now feeling responsible for taking care of his mother, he would like to find a way to provide a proper burial spot for his brother and father. As fate would have it, on Tài's journey he meets a geomancer who is seeking out the perfect burial location for a wealthy client in Hanoi.  Tài is indentured to the geomancer, who then sells Tài's two-year contract to his client, Cao Lai.   He meets and falls in love with a beautiful, young Chinese girl, also indentured to a wealthy businessman in Hanoi.  Although Tài's violent streak gets him into some trouble, with his love for Xiaoli and patient support  from Cao Lai,  he finally believes that he's getting his life sorted out and under control, and Tai is happier than he's ever been.  But Tài's hopes and happiness begin to unravel as he learns some devastating truths that send him into an emotional tailspin,  leading him to question everything he thinks he knows. 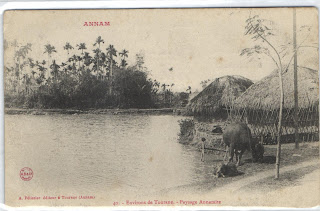 Reading this book is sometimes like flipping through a stack of postcards of old Annam. Ha fills his novel with  beautiful surroundings, sights, sounds and even smells, inviting  his readers to take a step back to another time and another place.   Whether he's talking about the beautiful Annamese countryside, the river's sometimes treacherous waters with the water buffalo grazing along the shores,  the narrow alleys of Hanoi or its crowded opium dens,  you forget where you are in the present as you're transported back in time.   He also hits on things that never seem to change -- the differences between rich and poor, crime, religious differences, love and the desire for revenge.

Khanh Ha did well for a first novel, especially in terms of setting and themes.  At the same time, the story tended to meander here and there and it might have been much tighter, offering much more of an emotional  punch, had it been scaled back a bit more during the editing process.  I'm also left thinking about the target audience for this book -- around its sense of place and authentic time feel, considering the subject matter and Tài's coming of age,  it may be best geared toward people  who read more sophisticated young adult novels, but I'd also recommend it to people who might be interested in that period of Vietnam's history.

Many thanks to TLC Book Tours and to Black Heron Press for sending me this book.

The book continues to tour through July 23rd; you can follow its travels at the TLC website.
Posted by NancyO at 5:59 AM