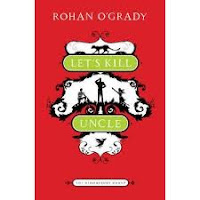 As the novel opens, two children are wreaking havoc aboard a ship: leaving blueberry pie on a sofa which was sat on by a retired admiral wearing white, spilling ink on the captain's charts, and throwing salad in the dining room among other nefarious deeds.  The crew can't wait to see them disembark and make their way down the gangplank to The Island, located in Canadian waters. They have come to The Island for their summer holidays -- Barnaby is supposed to meet and stay with his uncle there; the girl, Christie, is supposed to stay with friend of the family.  As it happens, Barnaby's uncle is not able to make it right away, so Barnaby is sent to room with a childless couple. The two children are the only kids on the island and start their time there making mischief, causing a lot of damage and uproar on the island, and eventually fall under the gaze of The Mountie, Sergeant Coulter.  While Barnaby and Christie settle in, Barnaby lets his friend in on a secret: he's worth $10 million dollars and his uncle wants the money and has been trying to kill him.  After Barnaby's uncle returns, and Christie sees that Barnaby is telling the truth, she comes up with a plan to save him: she reasons that before his uncle has the chance to kill her friend, they must do away with Uncle.

Let's Kill Uncle is, despite the title, a cute little book, one I probably would never have read had it not been for the fact that a few months back I saw the movie made from this novel in 1966 and wanted to read the story on which it was based. To be really honest, it's a novel I'd never heard of prior to the film (which imho, did not even come close to the novel). There's much more to it than murder; it's also look at the lives of the people on this remote island and the meaning of community.  It defies any sort of pigeonholing: at times it seems to be a book for older children -- there's a cougar in the story to whom the author affords human-like thought, for example -- but there's also the inner musings of Sergeant Coulter about his ill-fated hopes of love (in letters he writes to his beloved which he never mails) and his feelings of failure during the second world war, so the audience for the book is a bit unclear. Despite that shortcoming, however, the book is a good read: the author has done a fine job developing a sense of place, good characters --the uncle is a nasty piece of work and a bit mysterious as well, and the other characters on this remote island are a bit quirky, kind of what you'd expect of people who live tucked away here.  The story may be a bit antiquated for today's modern readers, but it still manages to drum up some suspense here and there.

This is definitely not my normal reading fare, but I liked it -- not so much for the uncle storyline, but for the stories of the people on the island. It's really tough to pinpoint who might enjoy this book, so I'm not even going to try. Overall, it's a cute little book with a sinister twist.
Posted by NancyO at 10:56 AM