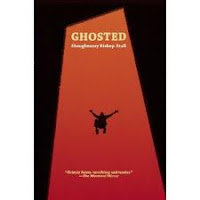 The cover picture with red is the American release cover, but I actually like the original blue cover better -- it more accurately reflects the psyche of the book:

I'm not sure why Americans had to have the red cover, but oh well.  On with the review.

“Anti-hero is a lot easier than hero,” one character notes to his best friend, but it is a lesson not easily learned for some people, especially the main character of Ghosted, another book I can add to my list of favorites for 2010.  It is darkly funny, yet while you're laughing sometimes you just want to cry over the desperation and darkness that permeates this novel.

Mason Dubisee is the main character in this story, set in Toronto.  At the end of his rope financially, mentally and physically, on a self-destructive bent, heavily addicted to drugs and alcohol, a loser at cards, Mason is taken in by his boyhood friend Chaz, who is also Mason's drug dealer. Mason had taught himself how to write, formerly

in order to document his own coolness, his guts -- his good-looking, good-lighting, good-karma-hair days -- the stuff that would sell a man to pretty girls and a fickle god so they'd take him as a hero,

and is trying to write a novel, but finds that he no longer "gives a damn about the reader."  Too high and too drunk to write, Mason becomes the "Dogfather," a kind of mafioso-themed hot dog seller out of a three-wheeled cart called the Dogmobile.  This is not exactly what Mason wants to do, but he literally has no other choice.  During one of his first days selling hot dogs, he meets a man named Warren, who finds out Mason is a writer, then offers him a proposition.  If Mason will write a love letter for him (Warren being much to shy to make any overtures toward the woman he loves), Warren will pay Mason $5,000.  Mason writes a series of different letters, handing them all over, allowing Warren to choose.  The next thing he knows, Warren is dead, evidently a suicide.  Mason attends the funeral, and hears one of the letters he wrote read by Warren's sister, only it's now a suicide note.  Mason is taken aback, but at the same time, realizes that maybe he's on to something here -- and comes up with a series of online ads designed to capture the eyes of those contemplating ending their lives, offering his services as a ghostwriter of suicide notes.  But as Mason becomes involved with these people, something happens inside of him, leading to a series of often-funny but simultaneously sobering experiences, including an encounter with someone who can only be described as a living embodiment of evil.

What really drew me deeper into the novel once I started was the author's writing. Oh my god, this man can write and write well.  His prose, which at times is almost poetic, brings scenes vividly to life -- first, the streets of Toronto:

There was a small park in the middle of Kensington Market that reminded him of Richard Scarry’s Busytown – every kind of folk doing every kind of thing – mohawked punks playing guitar, old Chinese women doing tai chi, a man on a unicycle being chased by small children, a circle of fishmongers smoking from a hookah, painters with their easels and watercolours, young Wiccans with their sticks and stones, people writing in notebooks, readers reading, singers singing, dealers dealing, drummers drumming, drinkers drinking – all together in the same small frame.

and later in the Sherbourne Men's Shelter for the "hard to house:"

It was like a hospital in an old war movie where they'd managed to keep the soldiers alive but never quite healed. They were propped in doorways, lying on a bench, curled up in a corner, reading on a cot, walking around in circles, their hands buzzing at their own ears. They wore modern-day civilian rags, but the war was still with them -- in their yes, in their hacking coughs, their shaking hands, in the stiffness of their walk. The war was the cold of the winter, the heat of the summer, the violence on every corner, the never being able to relax, the pain of memory, the loss of memory, the rack, the Lysol, the smack, the booze and the new weapons, too: the meth and the oxy and the giant TV screens attached to high-rise buildings. The war was foster homes, halfway houses, residential schools, jails, prisons, shantytowns, soup kitchens and shelters. It was never getting a real night's sleep, hands grabbing at your belongings, men coughing sickness right into your mouth. It was abusive fathers, dead mothers, cruel foster parents, crowded jail cells. It was TB and scabies and Hep C and AIDS. It was bedbugs and kerosene fires and cuts that never got clean. It was cops and gangbangers and bikers and bashers and pimps and your brother passing out on the streetcar tracks. It was schizophrenia, bipolar disorder, borderline personality. It was rage, isolation, mourning. It was self-deception, self-hatred, self-harm self-destruction. It was your old lady loving you, your old lady leaving you, your old lady dead. It was missing everyone you'd ever known. It was nothing ever changing and no one to depend on. It was a code that changed every moment, a war that never ended. It was suicide. And Mason, walking through the shelter, felt like a man who'd barely dodged the draft.

And within the story the author also has a bit of metafictional fun with his readers, including, but not limited to Mason's ongoing notes about his novel; "Socratic statements" that show up on a questionnaire for psychological therapy that Mason received two of each time he went to visit his doctor and wrote for her soberly in a journal; emails from and to his clients; and even videos.  He also seems to have a bit of fun with genre -- by the time you've finished the novel you're not sure how to categorize what you've just read, as the author changes his narrative style and perspective throughout the novel, especially at the end.  And I have to admit that as the book got a bit more on the thriller/suspense side, I was a bit disappointed -- hoping that the author wasn't trying to be one of those writers who sells out to attract a wider base of readers -- and came to the conclusion that perhaps it was just a vehicle for redeeming his character. At least I hope it was. But now that I think about it, I don't really care.  The book was so good it just doesn't matter.

Ghosted is one of those novels you just have to read to appreciate.  It's very different, very dark and by way of warning, there is one brief scene in which a character relates in a therapy notebook how he raped a child.  It's unsettling and disturbing at times, but it is so well written that you just can't stop reading it. The characters are well drawn, not made of cardboard and fit inside the story well, the dialogue is realistic, and the sense of place is so expertly evoked that you'll be there mentally no matter where the story goes. I can definitely recommend this novel but at the same time, it's for those readers who are into more gritty realism in their choice of books.  A warped sense of humor and a sarcastic streak couldn't hurt either. Books like this only confirm why I veer off the more mainstream-fiction track -- authors like this one are few and far between.
Posted by NancyO at 11:43 AM