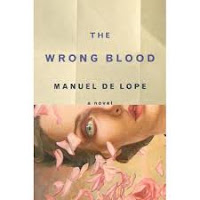 
The Wrong Blood  is the story of two women of different classes in Spain's Basque country: Maria Antonia Etxarri, the young daughter of a local innkeeper and Isabel Cruces Hernandez, who comes from a family of wealth and influence.  During the Spanish Civil War (1936-1939), their individual tragedies unexpectedly bring and then bind them together for the rest of their lives. Isabel falls in love with and marries an army captain, who is killed shortly afterwards, leaving behind not only Isabel but her unborn child. Maria Antonia, only a teenager, is raped when a group of soldiers take shelter at her father's inn. The local doctor, Felix Castro, is the central figure connecting them both. In the present, Miguel Goitia, law student and Isabel's grandson, is spending time at his grandmother's estate (which now belongs to Maria Antonia), a sanctuary of peace and quiet while he is preparing for his bar exam. His very presence there brings out memories of old wartime secrets that Miguel is not privy to -- and Castro is torn between telling him the truth about things or letting old memories lie dormant.  It is also a story about loss, grief, the nature of class distinction, and as Dave Boling, author of Guernica and one of the blurbers wrote, about  "... human survival at desperate times."

In terms of the writing, the direction of the plotline is a bit obvious once you begin reading, but that hardly matters in the long run.  I only rarely find an author whose prose is so eloquent that I want to read the book again just to appreciate its beauty. And considering this is a translated version, well, I can only imagine how absolutely wonderful it must be in the original Spanish.  The story is paced very well; it starts a bit slow, setting the overall tone immediately, while allowing the reader to absorb and appreciate small details that might otherwise be overlooked.  The sense of time and place is evoked largely through the use of flashbacks, which take the reader seamlessly and skillfully through the hardships of war into the present and back again, without causing any interruption to  the overall flow of the story. It is a book that will you find difficult to put down until the very end.

I recommend this novel to people who enjoy Spanish novels in translation, and who truly appreciate the beauty of the written word. It's definitely not a book for those who want something quick and easy, nor is it an action-packed novel that once you've read you'll forget, like so much fiction that's out there on bookstore shelves at the moment.. It's a book to be enjoyed slowly -- and kept on your shelf to visit again some day.