*Acid Christ: Ken Kesey, LSD and the Politics of Ecstasy, by Mark Christensen 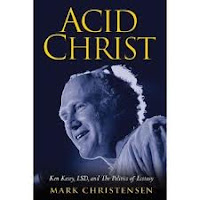 First, a huge thanks to the publishers who sent me this book as an ARC!

Ken Kesey is probably best known to most people as the author of the novel One Flew Over the Cuckoo's Nest (1962) or for his crazy group, The Merry Pranksters, made famous  through Tom Wolfe’s book The Electric Kool-Aid Acid Test (1968), which, sadly I have not yet read (but I just bought a copy, so that will be rectified shortly).  In Acid Christ: Ken Kesey, LSD, and the Politics of Ecstasy, author Mark Christensen has written what he calls a “participatory biography,”  offering not only Kesey’s  story but his own as well in a parallel narrative – so that he could explain how Kesey came to affect his own life as he grew up in the 1960s and joined in the drug culture that was transforming America one tab at a time. One of the major questions Christensen seeks to answer about Kesey is why, after writing two excellent novels, he decided to “ditch” writing all together.
The author used a wide variety of sources and has obviously done his homework.  The sections on Kesey provide a wealth of information and insight, especially when Kesey himself is speaking (via interviews, writings, etc.), although I have to admit that I haven’t read much about Kesey prior to this book, so I have to take Christensen’s word for everything else. The other thing the author does well is to situate the book in time – there’s a great deal of background as the younger generations moved from the whole Beat scene into the era of the hippies, Timothy Leary, and the LSD explosion -- the positive effects of which Kesey believed would actually transform the nation. As the author notes, Kesey wanted to “coalesce the counterculture,” and “open the American mind and set it loose, unfetterered by the conventional constraints of the nine-to-five,” the requirement for which was a “national party in which the punch was spiked with the stuff of dreams.”
As much as I liked the Kesey sections, the “participatory biography” thing didn’t work for me. Although Christensen’s accounts of his own life and his journey through the psychedelic era were interesting, I was disappointed that they took up so much space in the book. After all, this is a book about Ken Kesey, but there are long chapters about people that for the most part, had very little or no connection to Kesey. In fact, I’m still not sure about the author’s connection to Kesey, except that he was a friend of his brother.  There’s a lengthy chapter about Paul Krassner, another counterculture player, who did know Kesey, and who was actually the author’s first choice for a biographical subject, but when it comes right down to it, I wanted to read about Ken Kesey.
I would recommend the book (with the caveat about some long and rather slow-moving sections about the author’s experiences), especially to people like myself who totally missed  the whole hippie, LSD, counterculture movement but are still interested in that time period.  Personally, I think that whole movement laid the foundations for much of what’s happened since in terms of grassroot effort, so it’s important to have an understanding of its key players, and Kesey was definitely one of them.
Posted by NancyO at 5:58 PM