Parrot and Olivier In America, by Peter Carey 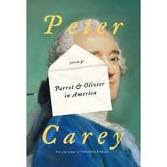 Parrot and Olivier in America is composed of two narratives that interweave throughout the novel: that of  Olivier-Jean-Baptiste de Clarel de Barfleur de Garmont, he of French aristo parentage, and that of  John Larrit (known as Parrot or sometimes Perroquet), son of an English  journeyman printer and a mother long dead.  Olivier's family were nobles who did not flee France during the revolution, but went to live in hiding in Normandy, so that when the monarchy eventually returned, their political position was tenuous. It became even more so when the last of the Bourbons (supported wholeheartedly by Olivier's mother) was later overthrown during the July Revolution of 1830. When Garmont was in his 20s and started attending lectures given by Francois Guizot, an activity deemed too politically dangerous for the young and naive man, his mother decided to ship him off to America for his safety:

You are a Garmont...the liberals see you and have no doubt you are a spy. The monarchists see you and know you for a traitor. You are in danger (77).

Ultimately his parents secured for him a commission to write on the state of American prisons, and create a report on his findings for France. Olivier, who as a child was a hypochondriac extraordinaire, never far from his Qianlong bowl of leeches, tends to be whiny and priggish, considers himself as a victim of the French Revolution, and has little to no understanding of others who are outside of his class and station.  Yet at the same time, there is a bit of a pathetic side to Olivier: he really has very little control over his own life -- everything is always decided for him by others.

Parrot, who as a young boy had escaped when his father and others were arrested in Dartmoor and ultimately executed for forging bank notes, had run across a Monsieur de Tilbot, who offered him help (eventually sending him off to Australia, promising that one day he would return -- the full account of which comes later in the story). As it so happens, Tilbot is also an acquaintance of the Garmont family, and turns out to be the initial connection between both characters. Parrot is older than Olivier, is an artist more firmly rooted in the working class, and in general understands the world better than his aristocratic counterpart. Parrot, a long time now in Monsieur's service, is called upon to spy upon Olivier while he attends Guizot's lectures. When Olivier's friend Blacqueville is killed defending their collective honors,  it is Parrot who is called on to escort him to America and to protect him while also serving as his secretary. And thus Parrot and Olivier come to America (but not until page 141!) -- and the rest of the book continues from there, where this odd couple of sorts come to realize the positives and negatives of living in a democracy and eventually come to terms with each other.

I have to confess to never having read de Tocqueville (although I am familiar with many of his ideas on democracy), so at the end, when the author notes

The author's debt to Tocqueville himself will be obvious to scholars who will detect, squirreled away among the thatch of sentences, necklaces of words that were clearly made by the great man himself,

I find myself definitely not in the category of one of these "scholars," and perhaps I missed a thing or two along the way.  [The London Review of Books for August has an interesting take on this aspect of the novel if you're interested.]  But really, I don't think it makes that much of a difference while you're reading this book (unless, I suppose, you ARE a de Tocqueville scholar and you find things with which you may disagree or dislike about Carey's treatment).

I had a few minor issues with this novel. First, the book tends to lag at times -- for example, in the scenes where Olivier travels from place to place with Godefroy -- to the point where I found myself skimming to get to the next part, and there were other situations as well where the action was a bit dull.  Olivier's character, although drawn well, was rather aloof and often unreachable.  And then there's the little twist at the end. Just when I thought I had control over how I felt  about both main characters, Carey knocked the wind out of my sails for a while and made me have to do a rethink. But overall, I genuinely liked this book. When Parrot's first account began, I remember thinking how much I liked the feel of the narrative, as if someone were actively engaged in storytelling. Carey's judicious  use of imagery (especially of the birds) ran throughout , as did his constant allusions to the love of art. I also enjoyed his scenes that seemed to be taken right out of Dickens, especially in the case of Watkins and the forgers at the beginning.

And I have to say also that I enjoyed the little barbs Carey throws out about the current situation in the US, especially when one of his characters notes that

America does not need either leadership or deep laid plans or great efforts, but liberty and still more liberty. The reason for this is that no one yet has any plans for abusing liberty. But wait, monsieur. It may take a century, but le fou viendra.

Take that as you will. My money's on W (pronounced "dubya").

Despite my minor issues with this novel, Parrot and Olivier is a clever philosophical debate about the pros and cons of democracy woven into a nice piece of historical fiction that will make you think about things long after you've put it aside.