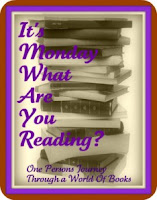 Today's installment of It's Monday (hosted by Sheila at Book Journey) is quite short, since there's basically nothing to report.

Read and reviewed last week, which was incredibly busy with little time to spare:
The Magnificent Spilsbury and the Case of the Brides in the Bath, by Jane Robins
The Stone Murders, by Matti Joensuu
I finished my review of Chef, by Jaspreet Singh

Read and not yet reviewed:
Our Kind of Traitor, by John LeCarre (ARC, courtesy of Viking/Penguin)

To be read this week, hopefully, but who knows:
finishing February, by Lisa Moore
starting Parrot and Olivier in America, by Peter Carey (on the Booker Prize Longlist)

as my daughter used to say in a rather flat tone, "whoopie doo," meaning big deal...I don't feel like I got much accomplished. Oh well!
Posted by NancyO at 8:06 AM