Tomb of Sand, by Geetanjali Shree

"A border, gentlemen, is for crossing." 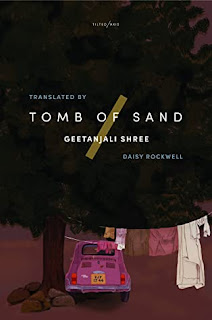 9781911284611
Tilted Axis Press, 2021; originally published as Ret Samadhi (2018)
translated by Daisy Rockwell
739 pp
paperback
It was the first paragraph that sold me on this story, which is highly unusual but it's what happened.  Here the author  reveals that "this particular tale has a border and women who come and go as they please," but even more to the point, that

"The story's path unfurls, not knowing where it will stop, tacking to the right and left, twisting and turning, allowing anything and everything to join in the narration.  It will emerge from within a volcano, swelling silently as the past boils forth into the present, bringing steam, embers and smoke."

I sat back, reread at that initial paragraph and guessed right away that I had here in my hands something completely and refreshingly different.  Evidently I wasn't alone -- at the website for the International Booker Prize, the blurb for this book states that the author's "light touch and exuberant wordplay ensures that Tomb of Sand remains constantly playful -- and utterly original."  And while the word "playful" fits, this novel takes a rather serious and surprising turn in its last section, making this book a most welcome addition to the world of Partition literature, described here as having

"helped generations to make sense of a period in the subcontinent's history that is quite difficult to fathom in its entirety."

Tomb of Sand is, as translator Daisy Rockwell notes in her "Translator's Note,"

It is all that and more; it is also hands down one of the best books of my reading year so far and sadly, I would not have known about it except that it was longlisted for the International Booker Prize which it would go on to win, deservedly so in my opinion.  I can honestly say I've never read anything quite like it.

An older, eighty-year old woman  (known mainly as Ma)  who is a mother, grandmother and now a widow, becomes seriously depressed at the death of her husband and decides that she will not be getting up.  Wrapping herself in a quilt, she remains in her room in her son's Bade's house, with her "back to the world, as though dead"  ignoring the rest of the family's pleas for her to get up.   She had, it seems,

"grown tired of breathing for them, feeling their feelings, bearing their desires, carrying their animosities. She was tired of all of them and she wanted to glide into the wall with a tremor ..."

Things begin to change though first with the arrival of a cane brought by one of Bade's children, known as Overseas Son, a CEO of the overseas branch of the company for whom he works.  At first, his grandmother remained unimpressed; but one day her other grandson Sid comes in to her room and sees her holding the cane "at a ninety-degree angle, eyes closed, still as a statue, looking every inch an otherworldly idol."  On the verge of laughing at this sight,  Sid hears his grandmother declare "I am the Wishing Tree," which, while she continues to remain in bed, has the effect of bringing into the house a host of people hoping that she'll grant their wishes. It isn't too long afterwards that "poof, she'd disappeared into thin air," and this is where the story truly takes off, as she is sought and found and returns not to her son's house, but to that of her daughter Beti.   It isn't long until Beti notices the reversal in their roles wherein "Beti became the mother and made Ma the daughter," and while Ma's presence tends to upset Beti's independent lifestyle, Beti also sees that it's a good arrangement.  As she notes, "When Ma came to my home she began to dream new dreams."
One of the frequent guests at Beti's apartment is Rosie Bua, a hijra (often described as  "third gender"), who is very close to Ma with whom she shares  (unknown until further on in the story) a history.   One of Rosie's plans was to someday travel to Pakistan; when tragedy strikes, Ma decides that she will go for Rosie, dragging Beti and an old Buddha statue that his been in her family for years along with her on a trip that is plagued by problems almost right away.
It is a gorgeous book, not only brilliantly written by its author but also brilliantly and skillfully translated by Daisy Rockwell, who says in her "Translator's Notes" that "to the translator, Tomb of Sand is a love letter to the Hindi language."  Noting that the author is fluent in English, she also says that Shree chose to write in her "mother tongue," relishing the "sound of words, and how they echo one another, frequently showcasing their dhwani," described as "an echo, a vibration a resonance."  It can be

"deliberate and playful, as in double entrendre and punning, an accidental mishmash of sameness, or a mythical reverberation."

Admittedly I didn't get all of the references and spent much time with my tablet on my lap while reading, but really, it just didn't matter to me -- I absolutely loved this book.  It is a great example of what a writer can do not just with story but also with language and storytelling;  above all it is a book about borders, physical and otherwise.  "A Border," as Ma says to a group of men in Pakistan, "is for crossing" and it is just a joy to read about how many borders this woman (and other people as well)  refuses to be confined or defined by as she comes into her own.  As the back-cover blurb notes, it is a "timely protest against the destructive impact of borders and boundaries, whether between religions, countries, or genders."  There is so much happening in this book that makes it pretty impossible to encompass in a brief post, but it is rare that I find something like this novel which, despite the tragedies here, is so very life affirming in so many different ways.  If you need the quick story fix you won't find it here; I'd recommend it to those readers who are willing to take a chance on something very different than the norm.  I feel so lucky having made my way through these pages; it's a novel I will never, ever forget.

a quick BTW:  I've recently read that Tomb of Sand will be available in the US as of 2023, but I bought my copies (yes, I made an error and ended up with two)  from Tilted Axis Press and having forgotten I'd done that, I turned to Waterstones in the UK.   I'm beyond happy I bought my book when I did.