We'll call this one fiction from India.  Although the author lives and works in Pennsylvania, he was born and raised in Mumbai, and the novel is set in his home country. 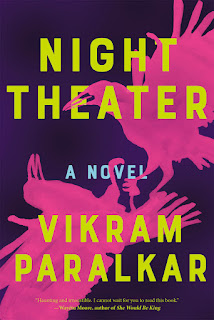 9781948226547
Catapult, 2020
originally published in 2017 as The Wounds of the Dead
206 pp
paperback
I can honestly say I've never read anything like this book, and that's a very good thing.  I seriously get tired of same old same old, and Night Theater is anything but. I have no idea how the author came up with this idea (unless it was from reading a lot of Kafka) but it's pure genius. I'll caution anyone contemplating reading this novel  that there are elements of, as the dustjacket blurb notes, "magically unreal drama," requiring a suspension of disbelief.  Let yourself go with this "fabulist" novel in that regard, and you will be rewarded many times over.
The first words of the book offer a clue as to the strangeness to come:
"The day the dead visited the surgeon, the air in his clinic was laced with formaldehyde."
The surgeon, who remains nameless throughout the story, has been running a  four-room clinic in a small, rural village in India for the past three years, with neither the amenities of a modern practice  nor a budget big enough to keep on hand what he needs to do a proper job.   The walls have cracks in them, the windows have gaps, and he has been spending his own money just to keep the place "from turning into an archaeological ruin." There is no nurse to help him (his budget request for one remains in bureaucratic limbo);   he relies on the pharmacist for assistance.  After a visit from his supervisor, an official dropping off vaccines and angling for a payment to ignore nonexistent "irregularities," he decides that he'll give it two more months "at the most" before leaving, vowing  "No more."   Tired and desperately needing sleep, he'll have to wait as a teacher, his pregnant wife and her son walk into the clinic asking for help.  They are strangers from another district, the victims of thieves who had taken their valuables, stabbed them and left them on the roadside just an hour or so earlier; they're also quite dead.  If the doctor can operate on them and fix their wounds before sunrise, when the blood will flow again, they can remain in the world of the living; if he fails, they must return to the afterlife from whence they'd come.
To say that the surgeon is overcome is to wholly understate his situation; it's much more as if the floor just dropped out from beneath him and he is left trying to find something to hold on to before he falls through.  It's the pregnant woman and her young son that convinces him, and enlisting the help of the pharmacist and her husband, he decides that he will do as they ask.  For him, it is an "inescapable madness" that he "would have to get through;" he would have to

"pretend that the visitors had been wheeled in on gurneys, with lolling heads and frothing mouths, victims of some mysterious accident. He would just do his job, and let the pieces fall as they would."

Once he begins, the surgeon becomes locked into what is best described as a ticking time-bomb  situation, and the tension builds as the clock slowly counts down the hours until sunrise.  As he makes his way through this challenging night,  he finds not only his medical knowledge tested in ways he could never imagine, but also his beliefs as he gleans from his patients, as the dustjacket notes, "knowledge no mortal should have."
I had to set aside time and put everything on hold once I started Night Theater because I couldn't tear myself away from it.  I also had to jerk myself back to earth and reality once I'd finished as I was so caught up in the tension here as well as the off-kilter premise and the blurring of the lines between living and dead.  It is definitely a high-stakes story, one that will have huge ramifications for everyone involved.   Surprises abound, but what also kept me riveted was the way in which the author wove into his story important and relevant issues such as corruption, inequality and health care, especially the idea of bureaucrats having power over whether one lives or dies.
Very well done, and the more I've thought about this book since reading it the more it's grown on me.  It was so good that now I'll look forward to reading anything Mr. Paralkar writes in the future. Night Theater likely won't appeal to readers who need straightforward realism, but for everyone else it's a no-miss.   And no, there are no zombies here.
very very highly recommended.
Posted by NancyO at 12:06 PM