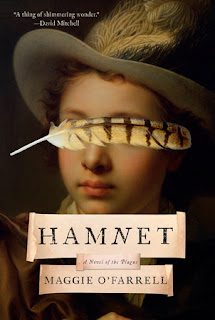 9780525657606
Knopf, 2020
300 pp
hardcover
"... I may run mad with it."
Certainly one of the most absorbing novels I've read this year, Hamnet paints such a moving picture of  loss, grief and pain that at certain  points I had to put the book down just to get out of Agnes' world and back into mine.
The dustjacket blurb reveals only a brief glimpse into this story, concluding with the following:

"...a tender and unforgettable reimagining of a boy whose life has been all but forgotten, and whose name was given to one of the most celebrated plays of all time..."

The play, of course, is Shakespeare's Hamlet, written about "four years or so later" after the death of his son Hamnet.  As O'Farrell explains in a segment of NPR's All Things Considered,

"spelling in -- of course, in Elizabethan times was a lot less stable, so Hamnet and Hamlet are, in fact, the same name name."

In the same segment, the author explains that at 16 she was studying the play, and her English teacher happened to mention "in passing" the fact that Shakespeare had a son.  Her thought at the time was to wonder "what does it mean for a man like Shakespeare to call a tragedy like this after his dead son?"

In this book, she reimagines how this came about, and does so without mentioning Shakespeare by name at all, explaining to host Mary Louise Kelly that

"He's the husband, or he's the father or the playwright or the actor. I needed people in a sense to forget who he is. I wanted them to think about him as a human being."

She also says that Hamnet, as a person, has been "really overlooked," and indeed Hamnet is the first person encountered on opening the novel, knowing that he needs to get help for his twin sister Judith who unbeknownst to her brother has been infected by the bubonic plague.  Scouring the house and the streets for his mother, he is unable to locate her or anyone else, and you can just feel his panic rapidly rising as he searches and waits.  The reader also has to wait for help to arrive since the next chapter goes back in time, introducing the young man who through some hinky business dealings of his father, is forced to serve as Latin tutor to the younger sons of a yeoman as part of a "debt or a fine" which his father "cannot--will not? -- pay."  It is while doing this job that he meets Agnes ("Ann-yis. Agnyez") , whom at first he mistakes for a young man "wearing a cap, a leather jerkin, gauntlets...," holding a bird on "his outstretched fist."   The novel alternates between present and past, as we learn the personal and family histories of both parties since their respective childhoods, including Agnes' skills in the ways of nature, her upbringing, her pleasures and pain as wife and mother, and the absent father that her husband becomes, unable to stay at home, going off to London to seek his fortune only to eventually find that fame which keeps him there for longer periods of time.

In the present, as Judith becomes ill,  Hamnet succumbs as well.  Death spares his sister; it is he who dies.  While no one at the time had ever recorded the actual cause, O'Farrell fills in the blank with bubonic plague, offering an excellent few pages of describing how it made its way to Judith  via a glassmaker in Murano. Agnes is frantic, as none of her healing knowledge helps save him; she feels guilty for being away when her children needed her, for being  "an absent mother," missing "the unheard cry" of her son, something that will "lie at her very core, for the rest of her life:"

Hamnet's death is the catalyst for Agnes' deep and painful spiral into a grief that cannot be assuaged and affects not only her but everyone around her.    As much as she would like to "unmake the skein of Hamnet's death," she also knows that for all of her pain, the world will keep spinning, indifferent to her pain,  and that

"There will be no going back. No undoing what was laid out for them. The boy has gone and the husband will leave and she will stay and the pigs will need to be fed every day and time runs only one way."

There is so much anger and hurt in this woman that as a mom myself,  it was often unbearable to watch her going through such a depth of anguish and pain at the loss of her child, while Hamnet's father continually looks for him "everywhere, in every street, in every crowd, in every audience" to the point where, as he says, "I may run mad with it."

Hamnet is a fine example of historical fiction, a fine re-imagining of the "overlooked" Hamnet and his death, but above all, it gives Anne Hathaway whose life is also somewhat of an enigma,  an identity as a strong woman who had to endure so much on her own. I did find it to be sometimes for my taste too overly detailed, with every herb, every remedy, every this and every that of the period eventually finding its way onto the pages.   It was just too much, and I would often find myself skimming these parts because really, I just wanted to get on with the story. Unlike a lot of historical fiction fans who love this stuff, it often becomes tedious for me until it's time to just move on.     I also found the prose a bit on the overwrought and heavy-handed side at times which dropped this book from a loving it to liking it status.  However, the story itself is so good that I was utterly absorbed in it from the very start and had trouble letting it go, and it is a book I can recommend.   Warning: you may need tissues.