The Mystery of Henri Pick, by David Foenkinos 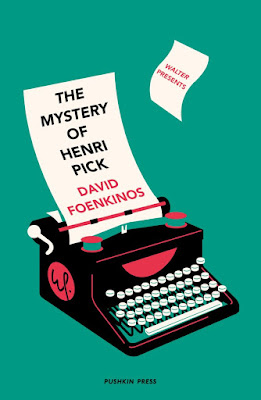 
My curiosity was more than aroused by the idea that Pushkin Press would be partnering with Walter Presents "for a series of timeless novels with strong international appeal."   The books chosen have been "handpicked" by Walter Iuzzolino himself, whose long-running Walter Presents has been a tv staple in my house for several years, even before the move to PBS in 2018, so there was no doubt that I would be buying this novel.  I've also preordered Walter's second Pushkin pick, The Second Life of Inspector Canessa, due out here in the US January of 2021.

I admit to being a bit surprised as I started reading this book, as most of the time Walter tends to lean toward international crime.  The Mystery of Henri Pick, as I discovered, is much more on the lighter side than I'd expected.  At first it was a bit discombobulating not having the full-fledged crime/mystery novel I thought I'd bought, so I had to regroup, let go of my original expectations and move on.  Once I relaxed, the book became a fun read, albeit with a slightly serious edge.

In the small town of Crozon in Brittany, librarian Jean-Pierre Gourvec had set aside a space at the municipal library "for the world's homeless manuscripts," inspired by his reading of The Abortion by American writer Richard Brautigan.   After placing ads in trade magazines "inviting all authors" to bring their rejected books to his library,  writers throughout the country came to


"rid themselves of the fruits of their failure. It was a sort of literary pilgrimage. There was a symbolic value in travelling hundreds of miles to put an end to the frustrations of not being published."

Meanwhile, in Paris, Delphine Despero has gone to work for Grasset, hired as a junior editor for this publishing firm. It was in this context that she met and fell for a young, aspiring writer by the name of Frédriéc Koskas who later accompanied her on a trip to the home of her parents in the village of Morgat, near Crozon.  Delphine is curious after hearing about the library of rejected books, and after  the pair make couple of visits, Delphine takes one of the manuscripts, The Last Hours of a Love Affair away with her and becomes throroughly enchanted with it, ultimately deciding that it absolutely had to be published.  The book's author is one Henri Pick, now deceased, but who used to run a pizzeria in Crozon.  As the dustjacket blurb  informs, "The book is an immediate sensation, prompting fevered interest in the identity of its author."  Curiosity grows about Henri Pick, not just for the journalist who wonders how this pizza chef could write such a novel, but also for his family, who'd never even seen him pick up a book, let alone spend time writing.   The publication of Pick's work also sets off a number of "unforeseen consequences" which make up the bulk of The Mystery of Henri Pick, as it is definitely a novel that "changed lives."

This book fortuitously arrived at a point when I needed something mind-refreshing, something on the lighter side, and the author threw a few hours of happy reading my way.    Author David Foenkinos noted that his book is "a playful reflection of the literary world,"  as well as a "tribute to books and literature and to the writers that have long been heroes of mine," and I have to admit that I couldn't help feeling rather guilty every time he mentioned a title that has been sitting on my shelves, sadly neglected and sadly unread.  The story is definitely "playful," and while I loved the literary references as well as the great love for books and literature displayed throughout, for my taste it goes too much into the private lives/soul searching of all of the characters affected by the publication of Pick's book, making it drag a bit in the reading after a while and sometimes turning toward the "cutesy" side which is just not my cuppa.  I also want to say that the dustjacket makes a lot of the "obstinate journalist," but in reality, he takes up far less space than I would have thought from the book's description.    But then came the ending which  I can only describe as completely unexpected and which I greeted with mental applause and a silent shout of bravo in my head.  Now to watch the film.

Overall, it's fun, it's lighthearted, and we can all use some of that happening in our lives at the moment.