The Stones Cry Out, by Hikaru Okuizumi 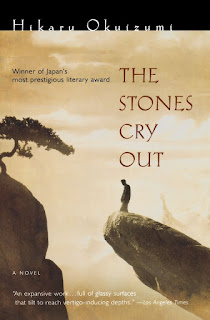 "They would all die in this dark cave. They were dead already."

Another random choice and another winner -- my lucky streak continues.  I'm sure that one of these days I'll go to my shelves, pick a book completely arbitrarily and find one that not's so hot, but for now, the good luck continues.

The author of this book won Japan's prestigious Akutagwa Prize for this novel, and after reading it, I can see why.  Its short 138-page length might tempt people into thinking it's an easy, breezy read, but really, it is anything but.  In this short space, as the review blurb from The Detroit Free Press says, the author has managed to


"create the most vivid of fictional realms, the inner world of an Everyman battered by the cruel and seemingly random hand of fate..."

and has effectively "magnified" the horror of this "Everyman's" story in "the quietness of its telling."  If I could organize words around my thoughts like this reviewer, I would be saying the same thing.

The Stones Cry Out recounts the story of Tsuyoshi Manase, who, as we learn at the outset had become a "fanatic collector of stones."  Before realizing what would become his passion,  Manase had been a soldier during World War II, and had found himself wandering through the jungle before finding a remote cave in Northern Leyte.   When we first meet Manase, we are told that he remembers very little about his experiences in that cave or about how he came to find himself in a POW camp after having been captured.  After a year and a half Manase was repatriated and had started on the road to becoming a successful businessman, during which time his "recollections of war began to fade."   He began to view his war memories as a " brief glance into a dark hole through a window."  But what he does not forget  is a terrible fear of isolation, and more importantly,  the words once spoken by a lance corporal who had been in the cave with him, telling Manase that the "tiny pebble you pick up during a walk is a cross-section of a drama that began some five billion years ago." What stuck with Manase was what the lance corporal had said next:


"That little pebble is a condensed history of the universe that keeps the eternal cycle of matter locked in its ephemeral form."

It will be these words, which "lodged themselves in his heart," that will drive Manase to begin collecting stones.  As the years go by he marries, becomes very successful and has two sons; however, he finds himself becoming more isolated and more detached from his wife and children because of his passion for collecting. He also begins to find himself in situations that sort of trigger nightmares and memories and in this way, we learn little by little what actually happened to him in that cave.  When tragedy strikes his family, Manase will have to come to terms with the fact that not only does the darkness of his own personal trauma often return "like phantoms to the surface of his memory" but that it also has the potential to be passed on to take root in the physical  present, sort of infecting all of those around him in different ways.   Consider this idea in human terms and it makes for one hell of tragic story.

Obviously I'm just sort of outlining basic plot here,  but what happens in The Stones Cry Out is best experienced rather than simply read about. This book moves well beyond simply plot to explore how memories of trauma are never really "frozen" or "locked," but rather like the crystals in the rocks that Manase studies so intently, seem to have  "an inner urge to grow," even though the "urge had been forcibly repressed by some sort of magic keeping them locked inside this narrow space."   The question is this: "if that spell was somehow broken, would not the minerals burst into movement?"  How that plays out I won't reveal, but if ever there was a book to read that highlights the human psychological costs of war, it's this one.

It's a sad but beautiful book and one I recommend.
Posted by NancyO at 12:47 PM