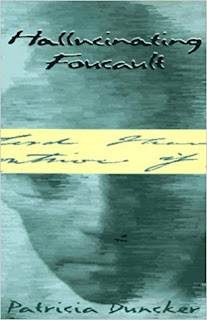 I chose Hallucinating Foucault completely at random as part of an effort to read books that have been sitting on my shelves for years untouched, gathering dust and making me feel guilty for ignoring them.As it turns out,  I've picked a good one yet again.  To be honest, it's rare that I come across an author's first novel that is so polished that it's hard to believe it's a debut, but that is definitely the case here.  While not a huge fan of the ending which I found slightly overwrought, the rest of the book blew me out of the water, and these days, it takes a LOT for that to happen.

The unnamed narrator in this story is working on his doctorate at Cambridge, studying the life of French author Paul Michel, "the wild boy of his generation."  Along with his works, the narrator worked to "build" an image of his subject, a man who was, as he says "beautiful. And he was homosexual," a fact that he "insisted" on bringing up in all interviews he'd ever given. In one of these interviews, when asked which other writer "had influenced him the most," Michel had immediately answered Foucault.  There were, as we are told, several "uncanny links," between Paul Michel and Michel Foucault including the fact that they were  "both preoccupied with marginal, muted voices," and both were "captivated by the grotesque, the bizarre, the demonic."  Both also also "explored similar themes: death, sexuality, crime, madness..." (31).  While their styles were different, at the core of the works of both men (Foucault's philosophy and Paul Michel's fiction) stood "the revolutionary project of thinking differently."    All of this is background to the real story here, which begins with the narrator  falling for another student he calls only "The Germanist," a young woman studying Schiller who, as our narrator discovers, also seems to have an interest in Paul Michel.  After a while she finds an article that reveals the current whereabouts of Paul Michel, currently within "the white prison walls of a psychiatric unit" in France.  The Germanist challenges our narrator to go to France to find Michel, and he goes to do just that. And this is the point at which where the story actually begins; as it progresses, we discover that Hallucinating Foucault starts becoming less of the quest tale I thought it was going to be and much more of a space for exploring relationships, the most important being that between a writer and his readers. At its heart lies a love story, and that's about all I'll give away here.

It's all so very nicely done, and as I said earlier, I was floored when I discovered that Hallucinating Foucault was the author's first book.  And not to worry -- it's not necessary to be familiar with Foucault's work to read this book; Duncker does  a fine job of bringing out some of Foucault's main themes here (madness, sexuality, the nature of truth)  and they flow sort of effortlessly throughout the text.    I won't kid you -- it's a challenging read that requires thought, and it grows in intensity as we come down to the ending, but it is so worth it.  My advice: spend time savoring this one, although in my case, I never wanted to put it down once I'd started.  One more thing: this book is definitely not one for those who constantly swim in the mainstream.

If this is an example of the books I've been neglecting over the years, I can't wait to get to the others. Seriously, this one is off the charts good.