You Should Have Left, by Daniel Kehlmann 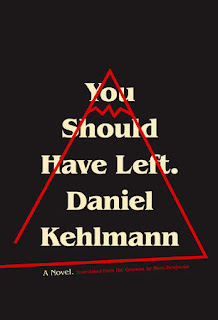 Everywhere I turn when reading about this book I find comparisons to Stephen King's The Shining.  In one sense, I get it, because it is about a man who has taken his family off to a remote location to work on a screenplay and weird stuff starts happening around him.   In another sense, in my most humble of casual-reader opinions, to liken it to The Shining sort of cheapens this book in a big way. It also makes for a number of readers having dashed or unfulfilled expectations -- after all, if you're expecting something along the lines of a Stephen King horror novel and you don't quite get it, well, that makes for an unhappy reading experience.   On the other hand, I had zero expectations before reading this book and had quite a happy reading experience.  In fact, I was downright chilled to my bones before it was all over, and not because of any kind of supernatural element, but because of the psychological aspects of this book.

The entire book is a set of journal entries kept in a notebook, and right off the bat we learn that the narrator is "up here" with "new surroundings, new ideas," and "a new beginning."  We also learn that there had been "constant arguing" with his wife -- and that while it at least has stopped in relation to taking care of their daughter,  all is not quite right, since her bad driving caused him to say something, resulting in the two yelling at each other up the mountain road to their vacation home. He can't even work when his wife and daughter are in the room, but he pretends anyway, because he knows she'll just start complaining.  If she's not complaining about him not working, then she complains about him not spending enough time with them.  And as the arguments continue, we sort of get a picture of a not-so-blissful married life which evidently isn't being helped by the change in scene to this lovely home in the mountains of Germany.   Our nameless narrator is working on a screenplay for a sequel to a film which for which he'd also written the screenplay, and is evidently under quite a bit of pressure moneywise, what with the new town house they'd bought, carrying a mortgage which is "far from paid off."  And there's more -- he's also under pressure from the powers that be in charge of the film.  He's been told by the producer that if doesn't deliver, the production company, "which owns the rights," will have to find another writer if he doesn't deliver.   What he produces when he writes is crap, and he knows it.

It isn't long before he begins to have disturbing dreams, and then a trip for provisions to the small village at the foot of the mountain takes a somewhat ominous turn in a conversation about the house with the shopkeeper; it gets worse when a fellow customer tells him to "Get away quickly."  The remainder of the journal entries begins to reveal even more unsettling episodes he has in this isolated  house that will lead to some pretty bizarre behavior on the part of the narrator, especially after he makes a particularly disturbing discovery.

While reading this book, eventually I got to the point where I felt like I watching a series of nightmares unfold, but I had the even stronger feeling that I was caught inside of an MC Escher drawing.  It's a story where you really have to decide if what's going on here is due to any sort of supernatural influence or whether there's something else at play here.  I was sort of on the fence until I came across a particular journal entry on p. 89 that struck me and made me go back,  reread the book,  and re-evaluate what I thought might be happening here based on those few lines, and it all started with the discussion of a "creature drawn on paper" who "if it could live, would live entirely on paper, on its surface"  faced with "a mountain on the paper."  Think shifting of geographical contours on an existential level, and that's where this book took me, and it was downright unsettling.

You Should Have Left was billed somewhere as a haunted house novel (sorry, I can't remember where I'd read that), and that was the reason I picked it up. I discovered two things: one, it actually reminded more of the work of Oliver Onions, who wrote several tales that link creativity (or the lack of) with insanity, and two,  I was also reminded me somewhat of the style of the work of author Jac Jemc in her book The Grip  of It, read earlier this summer, where she used various tropes associated with haunted houses to get to the root of what was haunting her two characters.  And despite some low reader ratings, I thought You Should Have Left turned out to be original, definitely frightening, and frankly, up there with the most disturbing books I've read this year.   I don't know about anyone else, but reading a record of and therefore becoming a witness to someone's complete mental deterioration is far more frightening than anything a supernatural tale could possibly conjure up in my head.