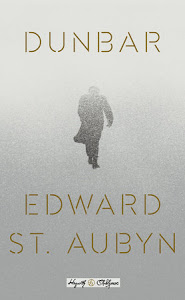 Dunbar is another book in Hogarth's Shakespeare series, and as in King Lear, the play on which this novel is based, there is nothing happy about this story whatsoever.  I mean, come on -- it's one of Shakespeare's tragedies, so we all know things are bound to turn out badly.

In this case, the original is  best, so let's get that out of the way right now.  But St. Aubyn doesn't exactly go scene by scene and rewrite King Lear -- here he's crafted a timely tale, one that works especially well these days when it comes down to the lust for unchallenged power and wealth.  But it's also, like the play,  a book that focuses on one family, here headed by Henry Dunbar, a man entirely used to wielding the reins of absolute power and control.

Henry is a "Canadian media mogul," one of "the world's richest, and arguably the world's most powerful man."    It all starts when Dunbar decides that it's time to "lay down the burden of running the Trust from day to day."  As he says to his attorney, he's getting old (he is in fact 80), and that his daughters would be happy to look after him, since "there's nothing they love more than fussing over their old father."  He's referring to two of his three girls, Abigail and Megan; the third, Florence, he'd turned against when she told him that she wanted nothing to do with "the family business," and they've been estranged for a long time.  He's wrong about the two daughters though  -- there is definitely no love lost between them and their father, and as soon as they possibly can they get him out of the way, getting a psychiatrist to certify him so they could stick him in an out-of-the-way care home in rural Manchester, leaving the way open for them to acquire the Trust.  The fun begins when a fellow patient named Peter decides that he and Dunbar need to escape;  while they're on the run, Abigail and Megan make plans to track down their father and get him more securely out of the way. They never counted on Florence, however, who's decided that it's time to make peace with her father and is on her way to find him.

Dunbar is a delightful read, really. Betrayals abound, plots within plots arise, and it's a sort of eye-opener as to how cutthroat people can be when they're intent on getting what they want.   And although it's not a true modern conversion from Shakespeare, many of the same elements are found in both the play and the novel. As just one example, the scenes where Dunbar is out wandering through the snow reminded me of Lear's time out on the heath, not just in terms of the backdrop of the natural world,  but also because his time there, as in the play, speaks to his understanding of his own vulnerability, his grief, and his guilt. He's only got himself to deal with and it's a major awakening.  Very nicely done; it's my favorite part of the entire novel.


After the first time through this book, I was kind of put off by his portrayal of Abigail and Megan as being so over-the-top villainous, but the second time through it made much more sense.  The people in their orbit who do their bidding (and hatch nefarious side plots) are the same as well, but it hit me that the daughters are not so much villainous as completely soulless, which, I suppose, explains how people like this obtain and stay in their positions of power.  I was sort of unhappy with the ending, which came quickly and was just sort of there, but again, in the long run it just didn't matter because really, if you know what happens in the play, you know what's coming down the pike here.  And ultimately, the story in both the book and the play hinges on the central character's slowly-building self awareness, and that's what makes really this novel worth reading.