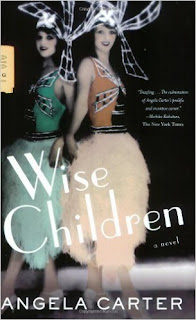 "It is a characteristic of human beings, one I've often noticed, that if they don't have a family of their own, they will invent one."

Wise Children is a lovely book in which there is never a dull moment, and I do mean never. It is funny, audacious, bawdy, and often flat-out farcical crazy, and I loved every second of it. Why is that, you might want to ask, and my answer is that above all, it is just teeming with life.

The novel begins at 49 Bard Road, Brixton, London, South West Two. It's a special day -- the Chance sisters ("Chance by name, chance by nature") are celebrating their seventy-fifth  birthday. Notice I used the word "their" -- the women are twins: our narrator, Dora, was born just five minutes ahead of her sister Nora.  On this day, Dora  gives a "little shiver," because she knows that "something will happen today." She doesn't "give a monkey's" what it is -- as she says, "Just as long as something happens to remind us we're still in the land of the living."  It's also the day of the centenary birthday celebration of their father,  the actor Sir Melchior Hazard,  "though not, ahem, by any of his wives."  Notice also the choice of last names here: Chance and Hazard, which you'll understand more as you go through this book.

The title of this book comes from an old saying that is brought out now and again here: "It is a wise child that knows its own father," and one thing Carter does quite well in  Wise Children is to examine the idea of parenthood -- not just on the paternal side, but the maternal as well.

As Dora notes at the beginning, some readers may want to know "Just who is this Melchior Hazard and his clan, his wives, his children, his hangers-on," so her role is to "provide some of the answers:"


"It is in order to provide some of the answers to those questions that I, Dora Chance, in the course of assembling notes towards my own autobiography, have inadvertently become the chronicler of all the Hazards..."

and with that, we are launched into a saga which, as W.B. Gooderham notes in a Guardian article,


"contains all the juicy Shakespeare tropes of ambition, greed and revenge; fathers and daughters; brothers and sisters; twins, mistaken identity, incest and adultery."

In and around all of that, there's a lot happening in this book about these twins (just FYI, twins and twinning play a huge role here)  and this rather odd family with roots in the theater.  As just one example, Carter's biographer Edmund Gordon points out that the author wrote books  about "performance and self-invention in one way or another," and that is certainly the case here.  He believes that at its heart, Wise Children is


"about what happens to women's identities as they grow older and the culture ceases to treat them as sexual beings." (375)

and quotes Carter as saying that

Whether anyone concurs with Gordon's idea or not, women's identities are definitely a huge, unmistakable  part of this story.

Throughout this zany, but excellent family history as related by Dora, another thing that is also quite obvious is the ongoing contrast between legitimate and illegitimate, between high culture and low, between lower class and upper class. The book  begins with Dora welcoming us to "the wrong side of the tracks."    As she reveals, though, "you can't trust things to stay the same", and I think that's one of the most important ideas to come out of this novel. Nearly everyone in this story has ties to the English theater, which like the Hazard clan, is also a mix of legitimate and illegitimate, and we are treated to a rather unique look at its history that happens to coincide with that of the family.  So well done!

I would love to just go on and on about this book, but time and all that. So I'll finish by saying that I'm sure I could read this book another two or three times and find something new I'd missed before -- that's just the sort of book  it is.  Anyone who hasn't read this novel is in for a treat -- I can promise that this book is one of a kind, and that it is a story not soon forgotten.   It's a lovely book, really, and it's sad to think that this was the last book Angela Carter ever wrote.

There's a reason I love her work, and this book is just one example of why.


******
For a more in-depth examination of this book, you can read (after you've finished, of course),