*and you thought she only wrote battle hymns: Julia Ward Howe -- The Hermaphrodite 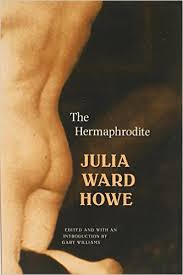 
Writing about this novel is not an easy thing to do, but I'll start by saying this: story very good, writing felt sloggy past the midpoint, difficult to understand sometimes but overall, very much worth the effort.  As a casual sort of reader, it was really all I could do to stay focused on this book at times, and toward the end it became even more difficult for me, even as it gained in intensity.  Now, having said that, I do think that it's an important book on many levels, considering when it was written and what was going on in the life of the author at the time.

The very basic story is this: Laurence, scion of a wealthy and important family of the time,  is sent away to school for his childhood and teen years, so that he "might become robust and manly, and haply learn to seem that which I could never be."  He had been born an intersexed person (hence the title), then  "baptized...with a masculine name" since his parents had decided to "invest" him with "the dignity and insignia of manhood..."  Throughout his school years, he rarely saw his parents; when he did, they were "cold and reserved" so that unlike most kids, he would rather have been at school than at home.  Laurence was a model student, well respected and "scrutinized" with interest by both sexes. As he notes, though,


"For man or woman, as such, I felt an entire indifference -- when I wished to trifle, I preferred the latter, when I wished to reason gravely, I chose the former. I sought sympathy from women, advice from men, but love from neither."

It is during his later school years that an older woman, Emma P., decides that Laurence will be her conquest, but when she discovers the truth about him, she  succumbs to apoplexy (I love that word)  and becomes, in Laurence's words, "a maniac" who "lay foaming and writhing on the floor" at his feet. This only increases Laurence's own alienation and his fears of intimacy, and things get even worse for the poor guy when he returns home at the close of his school career. There, his father makes him sign over his birthright to Laurence's younger brother, who would most likely produce an heir and continue the family line.  Fleeing from home, he comes across a hermitage where he takes up residence until he's at the point of both madness and death; he is then taken to live with adolescent Ronald (who discovers him in this condition) at Ronald's family home for a while. There, he serves as Ronald's tutor.  Ronald falls in love with Laurence; then after an encounter between the two, Laurence takes off for Rome, where he comes under the tutelage of Berto.  After some trouble arises, his friend Berto convinces him that he should disguise himself as a woman and stay with Berto's sisters at the family estate. I'm not giving away either the ending or any of the high points of this story here;  anyone interested should really read it without already knowing everything. 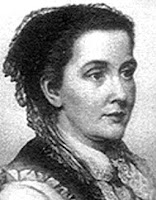 Now, very briefly, as to its importance, there is so much going on in this book that I can't begin to cover it all.   I'll start with Gary Williams and Renee Bergland, who  note in their introduction to Philosophies of Sex: Critical Essays on The Hermaphrodite (Ohio State Press, 2012) that Howe's book


"contributes to a seismic shift in how we understand nineteenth-century gender awareness and sexuality in antebellum America."

If I went into detail as to how this is so, I'd be writing for days, but Bethany Schneider in her contribution to this work briefly notes that Howe uses


"her ambiguously sexed character to interrogate desire and the acts that constitute sex,"


"how gender informs acts of sex and how gender is transformed through sex." (139)

In short, here Howe envisions gender as something constructed -- nowadays this isn't such an unusual idea and is covered widely in literature,  but in 1840s America, it was something very rare. The reverse was true in Europe: as noted in the novel's introduction, Gautier was writing along these lines in his Mademoiselle de Maupin (definitely NOT an American favorite of the time, an outrage to the "common sentiment of the American mind")  as was George Sand, whose Gabriel featured an intersexed character, and whose work Howe admired.

In the introduction to The Hermaphrodite, Gary Williams, who has painstakingly reconstructed the fragments of this work from Howe's originals,  notes that "Howe saved herself with this history of a strange being," which he claims is a "projection of both her husband and herself;" he also notes that "the narrative...is solidly rooted in the psychological terrain" of Howe's life at the time.  Her marriage to Samuel Gridley Howe was problematic from the beginning.  According to Michael Bronski,


"When Howe was on his honeymoon with Julia Ward Howe, he received word that Charles Sumner was very upset and wrote him a passionate note saying that he wished that he was there with them. Interestingly, Sumner himself married later. They have complicated relationships. Julia Ward Howe ... wrote a novel about a hermaphrodite--a man/woman who loves both men and women--that most critics now think was her own meditation on her husband's bisexuality."

Williams notes that "the trope of the hermaphrodite seems to have offered a scaffold for trying to understand in corporeal terms why a man (or an apparent man) might wish to deflect the attentions of a beautiful and devoted woman."  (xxv)  Later he notes that


"the hermaphrodite was arguably as useful as a screen on which to project certain other aspects of her situation. Laurence may be Samuel Howe, yes, but "he" is also Julia, a being fusing culturally ascribed impulses of both genders and thereby consigned, according to the logic of American domestic ideology, to a loveless and sexless ambition."  (xxvii)

She also, according to Williams in his Hungry Heart, The Literary Emergence of Julia Ward Howe, felt constrained by "claustrophobic conditions" (marriage, motherhood, male society's expectations of women in those roles)  that hindered her desire to fulfill her intellectual ambitions. her frustrations are also explored in The Hermaphrodite, most notably in the scenes where Laurence, now Cecilia, engages with Berto's sisters, watching them move freely in their relationships and in their own intellectual pursuits.

There is so much more to talk about -- art, the spirit of true and nonsexual friendship between men and women, alienation and so on. However, there have been a large number of scholarly treatises on this book which anyone interested can find online, so there's no way I can give The Hermaphrodite its due. Suffice it to say that if you can get through the often boggy prose, it is well worth exploring, and I'm extremely happy to have read it.  Truthfully, though, it was one of the most difficult books I've ever read.

And thus ends 2015's little mini-project of looking for the Great American Novel. For the rest of this year, I'll be reading more contemporary novels, but I will pick up the Great American Novel project (post-Civil War) once the new year starts. I'm really enjoying finding these really off-the-beaten-path books and I've had a great time with them.
Posted by NancyO at 1:16 PM