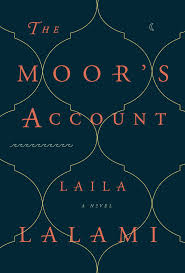 
Not only was The Moor's Account longlisted for the Booker Prize this year,  it was also a finalist for the Pulitzer prize for 2014, a double honor for the author.  Once again it's a book where my reaction is mixed, but more later.

In this book, the author takes up the story of the 1527 expedition to "La Florida," the next potential jewel in the crown of Spanish King Charles I. The mission to claim this area was given to Pánfilo de Narváez; also on the expedition was  Álvar Núňez Cabeza de Vaca whose account, Naufragios,  which you can read here in translated form.  The expedition, of course, is historical fact as is the presence of the titular "Moor," a slave named Estebanico, a Muslim African man who came to belong to expedition member Andrés Dorantes.  Hundreds of men started out on this journey and only four of them (including Estebanico)  lived to tell the tale.

But hold on a minute here.   The fact is that in real life it was only the surviving Spanish explorers who offered narratives about their collective and individual ordeals. Although mentioned in Cabeza de Vaca's account, Estebanico did not leave any record of his own.  In this book, the author corrects that omission, much in the same way that Amitav Ghosh in his Ibis trilogy gives a voice to people whose stories never make into the realities of the historical record.   Laila Lalami does much the same here.   Estebanico's perspective and his personal story drives the entire narrative, and this fictional  account that brings the Native Americans onto the stage as strong participants holding their own against outsiders is very different than the "real" histories that have survived through time.  He leaves no holds barred -- according to Estebanico, a number of expedition members engaged in the raping of  indigenous women, in cannibalism, theft,  and some of them even married Native American women even though they already had wives back in Spain.    His narrative of sharing the often-horrendous  trials and tribulations of the conquistadores not only offers an alternative history to the "official" accounts, but also gives him status as an early Muslim-African explorer in his own right.

The Moor's Account is an incredibly interesting take on this expedition, but it is also an account of Estebanico's own interior, personal journey as a human being.  As he relates the events of the ill-fated undertaking, woven throughout is his own life story, starting with his identity as Mustafa ibn Muhammad ibn Abdussalam al-Zamori.  He tells us about growing up as the son of a notary, and his father's expectations of him following in his footsteps; we learn how he eschews his father's wishes and goes on to become a merchant making lots of money (sadly, as he admits, in part by selling slaves), on to how he ended up in Spain as a slave renamed Estebanico.  I think I'll leave it there so as not to spoil anything for anyone else. I will say that when it comes down to it, aside from the novel as a work of historical fiction,  The Moor's Account can also be examined in the context of the power of storytelling -- while it's usually the conquerors whose narratives are passed on, there will  always another side to things that never gets recorded. More importantly for this book, Estabanico finds that his own story is a means of  retaining his dignity and the self that lies beneath his slave identity.

As interesting as the concept is, as involved as I was in their stories among the indigenous people, and as much fun as my history-geek self  later had researching the real expedition and the Native American tribes with whom the explorers came into contact, the book is definitely not without its flaws.  First, the fact that there was no map to offer any sort of point of reference along the expedition's journey just made me crazy and was frankly inexcusable.   I ended up finding a few, but having a guide in the book itself would have been beyond helpful. There is  a rather vague map on the author's website, which I only discovered after having read the book.  Second, I find myself totally in agreement with one reader who noted that Estebanico is pretty "uni-dimensional." It's so true -- he's really just too good, too our-time modern thinking and too squeaky clean to be believed. Another thing that really bugged me sometimes was that although we're talking about the 16th century here, the author tends to imbue some of her characters with 21st-century sensitivities, and frankly, it doesn't always come off well.

So once again I'm left with a mixed reaction. It's an interesting story that kept me turning pages, I loved the historical aspects and the author's focus on the power of storytelling,  but her (in my opinion)  somewhat flawed portrayals sort of lessened my enthusiasm for the novel as a whole.  However, I think I'm going to add this book to my real-world book group's line up for the year -- first, since we live in Florida it might bring some interesting historical perspectives to the table, and second, there's a lot of good discussion material here. I'd say if you're into historical fiction you might want to give this one a try.
Posted by NancyO at 11:33 AM