*Poe's only novel: The Narrative of Arthur Gordon Pym of Nantucket

While very  unlike the other American novels I've read so far, The Narrative of Arthur Gordon Pym of Nantucket is Poe's only novel, and while I should probably post about it at my oddly weird fiction section of my online journal, it is an example of  a 19th-century  American novel so the post is also appropriate here. The first time through it some years ago, I was downright incensed with the elements of racism that appear here; this time through (while having read a lot of scholarly works about this book in the meantime)  it became a totally different book.

the story:
Disguised as a genuine narrative, the story begins in earnest when young Pym's friend Augustus Barnard urges him to travel on the Grampus, a ship captained by Barnard's father. Pym's mother and grandfather are opposed to him going, with the granddad threatening to cut him off financially if he even brought up the topic again. So, typical teenagers that they are (despite what happens later), Pym and Augustus set up a scheme to fool Pym's parents to explain away his absence -- and Arthur stows away in the ship's hold in a clever set up designed to provide him access to Arthur's cabin once the ship is underway. After quite some time of hiding out alone in the dark, he comes to realize that things have taken an unfortunate turn on the Grampus in the form of a mutiny.  This is when things really get going here.  The mutiny sparks another mutiny, as the crew takes sides and set the captain adrift on the seas; fortunately for our narrator, Augustus is spared and at a timely moment, Pym reveals himself and  things start to settle down. However, the fate of the Grampus and those remaining is far from settled -- starvation, storms, sharks, and even a visit from the Flying Dutchman all help to contribute to the ship's ultimate demise.  The two who remain are picked up join the crew of the Jane Guy, starting another entire series of adventures which take our erstwhile narrator and his companion down into the Antarctic, going further south than any other expedition in history.  There, along with other wonders the crew has never seen, they discover the tropical island (yes, I did say tropical) of Tsalal, along with its very black native population, who have a strange fear of anything white.

Since the first time I read this book some years ago,  I've done a lot of reading about it and I've discovered that even Poe scholars can't agree on what to make of it. Dana D. Nelson in her The Word in Black and White: Reading "Race" in American Literature, 1638-1867 notes that


"Readings of Pym range widely, from psychoanalytic exploration to social satire, from self-referential commentary on writing (or reading) to a metacritical demonstration of utter absence of meaning. Those commenting on the text apparently cannot reach any consensus or 'thrust toward uniformity,'..."

Depending on which/whose critique/analysis you read, Poe's Pym is either a seagoing take on the American push for frontier expansion, an interior journey into the self, a quest novel (vis-a-vis Harold Bloom's definition, mentioned in this edition's introduction, [27])  a "jeremiad of the evils of slavery" or "covert statement of Southern racist ideology" [29], and it has even been noted as  (in part) a story of thwarted colonialism (from Mat Johnson's hilarious novel Pym ).  Author Toni Morrison  also argues re Poe's work that "no early American writer is more important to the concept of American Africanism than Poe because of the focus on the symbolism of black and white in Poe's novel."

The Narrative of Arthur Gordon Pym is a strange but interesting little book. According to that online font of knowledge called Wikipedia, Poe himself called this "a silly little book," and in some ways he's definitely right. It is way over the top and as one goodreads reviewer puts it, the "elephant in the room" of racism is definitely there. [as an aside, whether Poe was/was not a racist is still a matter of debate in scholarly circles.] After having read it, I can see why there are so many different interpretations of this novel (you can also add in bildungsroman), but in my opinion, no matter how you read it, it is much like many of Poe's other works, largely concerned with confronting the self in terms of other (if nothing else, the scene where he is disguised as a a dead man and can't recognize himself in the mirror is a huge clue), and ultimately destabilization of the self that follows as a result. In the end, though I believe it's a novel best appreciated on an individual basis -- I mean, seriously, if vast numbers of scholars over the last 100-plus years can't agree about the nature of Pym, how can there be any definitive interpretation?

A brief word about this book: for anyone remotely interested in further studies of Poe's Pym, this particular edition from Broadview Press is a good place to start.  The narrative is extensively footnoted, and there are three appendices -- "Sources for the Novel", "Contemporary Reviews," and "Other Writers' Responses to Pym"  (Melville, Beaudelaire, Jules Verne, and Henry James).  There's even a map of Pym's travels (which is reproduced here in a bit of blur but you get the gist) as well as an extensive research bibliography. 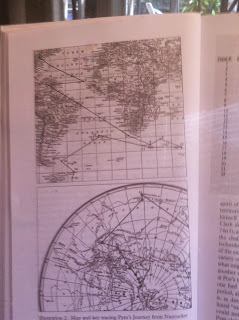 The Narrative of Arthur Gordon Pym of Nantucket is definitely very different in terms of American novels, but definitely worth a read and then a reread.
Posted by NancyO at 9:26 AM